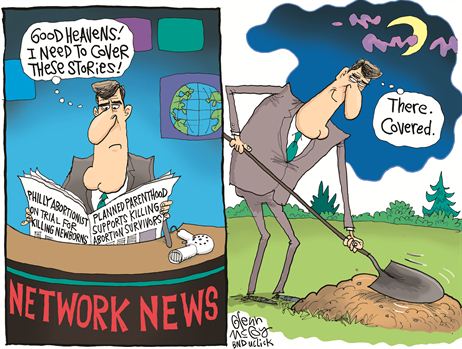 You might not know it, but there’s a mass murder trial going on in Philadelphia. There has been plenty of courtroom drama, and the death penalty remains a possibility.

The media are seldom shy about such sensational affairs, but they have been with one. Perhaps it’s because the accused mass murderer is an abortion doctor, who along with his medically untrained staff is accused of killing a female patient and several babies who had already been born, alive and breathing.

Doctor Kermit Gosnell’s preferred method of killing these latter, according to witnesses, was to sever their spinal cords. Upon his arrest in January 2011, his urine-scented and blood-soaked clinic was deemed a “house of horrors.” (I will spare readers further details, which are far worse.)

This trial’s gruesome revelations are emerging at almost the same time as new details about the loathsome and cowardly murderer who killed his own mother and then 26 others at Sandy Hook Elementary School in Newtown, Conn., late last year.

No amount of statistical whitewashing can cover up the stains of the left’s ideological failures there. But as Obama continues to wage war on law-abiding gun owners, his home team is trying its hardest to spread smiley-face lies upon damned lies to downplay Chicago homicide statistics.

The MSNBC Messaging Machine finds new ways to be stupid just about every day.

MSNBC is a televised blog. I keep saying this because it’s true: part of blogs’ charm, at least initially, was that they gleefully ignored any standards of professionalism. The honesty about the slapdash nature of them was bracing. And the honesty about agenda — to wit, we have one — was liberating.

But that upside of blogs also comes with a downside. Blogs speak relentlessly to one side of the aisle (are there any actual centrist blogs out there? It’s a business model I don’t think can actually work). We look for new ways to provoke — because it’s fun and profitable. And I don’t mean that in the cliched joke way; I mean, it’s literally both fun and profitable (at least in the sense of hit-whoring) to find exciting new manners of juvenile tweaking of one’s political enemies.

MSNBC has fully embraced the blogger ethos of hit-whoring provocation first, second, last, and always. As well as exploring all the new and inventive ways to call people you don’t like Nazis.

There simply is no professionalism at MSNBC, no aspiration to any kind of standards at all. It’s Dumb By Design (TM), because Dumb is Easy and Easy is Holy.

All embassies in Pyongyang were told today to evacuate by April 10 after dictator Kim Jung Un warned he could not guarantee the safety of foreigners.
The regime moved missile launchers to the east coast of the country today.

Is this any surprise since the requirements to get disability have been eviscerated, and the numbers getting it have skyrocketed?

(CNSNews.com) – The federal Disability Insurance Trust Fund, which takes in money via a federal payroll tax and pays it out in disability benefits, ran a record $31.2 billion deficit in calendar year 2012, according to the Social Security Administration.

That means the trust fund has run a deficit in each of the first four years of the Obama presidency.

Ace, The Conversation: Jake Tapper: Gun Control Advocates Should Have Basic Familiarity with That Which They Seek to Ban:

Where is the embarrassment? Where is the shaming? Where are people to humiliate these fools who seek to reduce liberty by banning a thing they don’t even comprehend?

I keep saying this, but we are duty-bound to force them to live up to their egotistical, wildly-overpraising conceptions of themselves.

Via Gateway Pundit:  Krauthammer: Obama Has Lost on Gun Control – He Just Wants the Cash:

The state of Kansas is safe for gun owners…

Several pro-gun bills are on the move in Topeka this week.  Today, the Kansas Senate voted 35 to 5 in favor of a comprehensive pro-gun package, House Bill 2052.  HB 2052, as originally drafted, would have exempted the lawful discharge of firearms—whether for hunting or self-defense—from criminal prosecution.  However, the state Senate altered the bill’s language and added several more pro-gun improvements.  HB 2052 will now go before a conference committee and then on for final approval by both legislative chambers.

House Bill 2052 was amended to include the following pro-gun reforms:

Thank you to the 35 Senators who voted for HB 2052 and to NRA members who contacted their statelegislators in support of this critical pro-gun reform.

Newsbusters:  Gun Owners of America Chief to Chris Matthews: ‘We Don’t Trust People Like You’:

MSNBC’s Chris Matthews had quite a heated debate Thursday with Larry Pratt, the executive director of Gun Owners of America.

At the end of a highly-contentious Hardball segment, Pratt told his host that he’s against all background checks “because we don’t trust people like you” (video follows with transcript):

Charles Krauthammer: The Trigger and the Poison Pill:

Democrats control the Senate and the White House, and they will only agree to a weaker trigger. Which is? Legalization first — i.e., living here openly without fear of deportation but nothing more until the border is controlled. Until then, no one even starts on the path to citizenship — no green card, no naturalization.

So why is Obama undermining even that compromise, asserting that “this earned pathway to citizenship” must not be “put off further and further,” that it must be “certain” — not contingent on verifiable benchmarks of border closure?

Why? Isn’t border control an elementary principle of sovereignty? What country deliberately forfeits the right to decide who gets to join its communal life?

Remember: We’re not talking about the 11 million already here who will be legalized as a matter of both practicality and compassion. We’re talking about the next 11 million. Without border enforcement, they will be here. If you don’t build it — the fence, the visa-tracker, E-Verify — they will come.

Why deliberately create the next immigration crisis? Is it because you coldly calculate that this wave and the next are destined to be partisans of your political party? Talk about placing party over country.

Or perhaps Obama intends this to be a poison pill: (1) Demonstrate unmistakable bad faith on enforcement. (2) Undermine the Gang of Eight’s already weak border-control “trigger.” (3) And thus force Republicans to defeat this “immigration reform” — as newly defined and newly defanged of enforcement.

Obama seems to want an issue, not a solution — a potent political issue for Democrats to demagogue in 2014 and 2016 and forever. If so, given the Democrats’ incessant and lachrymose expressions of compassion for those living in the shadows, this would be the ultimate in cynicism.

Rep. Jason Chaffetz (R-Utah) continued his tour of the U.S.-Mexico border, posting a new round of tweets on Wednesday that further display the need for enhanced border security.

The “worst thing” he reported seeing was 60 unaccompanied elementary age children leaving school and crossing the border to go home to Mexico. A supervisor reportedly told Chaffetz that this happens daily.

In his Fox News piece, Caddell took criticism of Sherman to a whole new level, accusing the writer of “incompetence,” “arrogance,” and of being “willfully ignorant.” To further drive the point home, Caddell included a verbatim e-mail from Sherman.

Evidently, Sherman believes that any publicity is good, so long as his name is spelled right. So, amazingly, Sherman tweeted out Caddell’s column as part of his response to Caddell. Sherman should have thought further about his communications strategy.

Caddell had decked him, but Sherman felt the need to keep the story going. Later that same Friday he tweeted, “Among the odd things in Pat Caddell’s Fox News column, he left out that he called me back moments after I called him.”

But why was that? Why did Caddell call back?

Diana West: Warning: You Are About to Read a “Forbidden” Column:

Get ready for the last straw.

First, though, I’d like to suggest that anyone reading this column in a local newspaper or news site pat the editor on the back for publishing what in our neo-medieval world of fear amounts to a “forbidden” column.

Yup, I am about to say something about the Great Barack Obama Identity/Eligibility Scandal again. I know that this is one rich and urgent topic that doesn’t see the light of day in certain so-called news outlets – and I say that from the experience of watching my own syndicated columns fail to appear when covering news of the White House press conference where the president’s long-form birth certificate was unveiled, news of courtroom proceedings in various states on Obama’s ballot eligibility and news of Sheriff Joe Arpaio’s investigators presenting evidence that the online Obama birth certificate is a forgery (andmuchmore).

So be it. This was, as noted, the last straw.

Linked by Theo Spark, thanks!