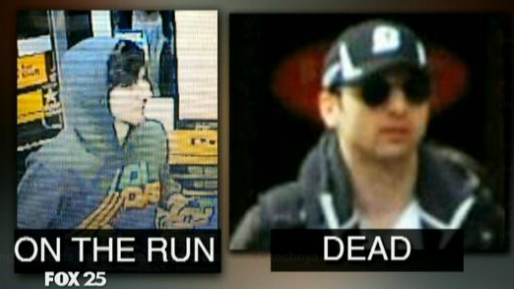 One down, and the other cornered, a COP ON SCANNER saying: ‘He is posting online — “I will kill all of you, as you killed my brother” ‘…

You can watch the live feed here. Reuter’s live coverage can be found here.

The two bombers are brothers from Chechnya.

Authorities shot and killed one suspect in Monday’s Boston Marathon bombings and police were searching for a second suspect who was on the loose in Watertown, Mass., early Friday morning following a chaotic night that left one police officer dead and another critically wounded in the Boston suburbs.

All public transportation was shut down in the greater Boston area Friday morning, for reasons of public safety, officials said. Residents of Watertown and several surrounding suburbs were asked to stay inside, and businesses were instructed not to open.

“This situation is grave. We are here to protect public safety,” Police Commissioner Ed Davis said. “We believe these are the same individuals that were responsible for the bombings Monday at the Boston Marathon” and the killing and wounding of the police officers overnight.The mayhem began about 10:30 p.m. when an Massachusetts Institute of Technology campus police officer responded to a disturbance. That officer was found fatally wounded inside his vehicle on the campus in Cambridge, according to the Middlesex District Attorney’s office.

The shooting launched a massive police response. A short time later authorities received reports of an armed carjacking by two males nearby in Cambridge. Police immediately began a search for a Mercedes SUV that had beentaken at gunpoint by the two males and was later spotted in neighboring Watertown, the district attorney’s office said.

Watertown police officers located the vehicle and after stopping it, exchanged gunfire with two men in a residential neighborhood. During the firefight, authorities said, multiple explosive devices were thrown from the vehicle and some exploded, which led to panic and concern in the town.

A transit police officer was critically wounded in the firefight, authorities said.

Police fatally shot one suspect during the firefight, the district attorney’s office said. He was taken to Beth Israel-Deaconness Hospital, where he was pronounced dead, doctors there said.

Here’s a useful interactive map on how the chase has unfolded thus far.

Boston bomb suspect #2, who is still at large has been identified as Dzhokhar A. Tsarnaev, 19, of Cambridge, Massachusetts.

Chechnya produces a particularly ruthless and brutal strain of Islamic terrorism if  these guys and the Breslan terrorists are any indication.

You would have thought that the fact that the culprits are quite clearly Islamic terrorists would have quashed the race-baiting, but you would be wrong.

Incredibly, on Twitter, leftists are latching on to  the fact that the brothers are from Caucasus, making them “literally caucasian” rather than noting the inconvenient religious ties.

Via Dan Riehl: MSNBC: Let’s not rush to judgment on the whole Muslim thing.

They’re still probably scanning the area tea party rolls to see if their names are on there. Courage!

Boston Bomber: “I Don’t Argue With Fools Who Say Islam Is Terrorism”…

Here is what looks like a twitter account of  Dzhokhar A. Tsarnaev.  There have been reports from his friends that this is his account. “Jahar” is the proper pronunciation of his first name, according to his family. The account goes back to April of last year.

LSM spin: Some of those were just retweets! Means nothing! He was from  Caucasus – a caucasian!1!11!

Gateway Pundit, who has apparently been blogging all night:

Father of Boston Bomber: “My Son Is a True Angel”

The Conversation: Interviews with the Suspects’ Uncles

The Corner: The Best Tweets from Today So Far

Ace: NYT Presents a Sympathetic Piece on Some Mixed-Up Lads

Weasel Zippers: Report: Boston Bomber Could Have Been Deported After 2009 Conviction…

14 thoughts on “One Down and One Cornered: Boston Bombers Are Muslim Chechnyan Brothers (With Updates)”