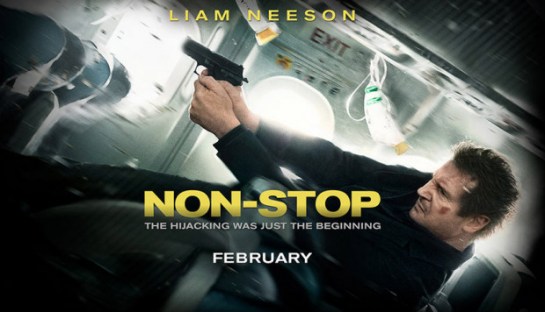 If you’ve seen the trailer for “Non-Stop”, you’ve probably thought – wow, that looks pretty good!  Looks like a real nail biter – my kind of movie.

I was definitely planning on seeing it. Until the word got out.

Take it away, John Nolte:

On an international flight over the Atlantic, burnt-out alcoholic flight marshal Bill Marks (Neeson) is hoping for a nice easy flight in first class where after sneaking a smoke and drink he might even be able to catch a little shut-eye. A text message informing him that one person on the flight will die every twenty-minutes unless $150 million is wired to an account, ruins that plan.

Counting pilots and crew, there are around 150 souls on board. Marks has 20 minutes to figure out which one is the bad guy. Red herrings abound. Is it one of the many actors whose faces we recognize but names we can’t remember? People start to die. Marks is fingered as the hijackert. Who’s doing this? Why are they doing this? What is their motive?

It turns out that the villain is not a hijacker but a terrorist — someone who wants to murder everyone on the plane to further a political goal.

After 9/11,  this 9/11 family member-turned-terrorist then joined the military but found himself disillusioned by the pointless wars.

The 9/11 family member-turned-terrorist is upset because America hasn’t done enough to ensure there will never be another 9/11. And so he figures that if he can get an air marshal blamed for a terrorist attack, America will wake up and anally probe us before we’re allowed on a plane, or something.

The villain’s sidekick is a member of the American military willing to murder 150 innocent people for a payday.

The one passenger on the plane who is forever helpful, kind, reasonable, noble, and never under suspicion is a Muslim doctor dressed in traditional Muslim garb including a full beard.

Are you kidding me? They didn’t learn after all of the failed Bush era anti-Iraq War movies that their liberal PC propaganda doesn’t sell?

Glenn Beck talked about the movie on his radio show, yesterday, calling it possibly “the worst movie ever.” He and his co-hosts Pat, and Stu went to see the thriller because “all three guys are big fans of Neeson.”

Beck said that he fully expected that when he was back on the air, Friday, he would be able to recommend the film to his audience, but now he’s warning them not to waste their time or money.

“It is really great, until you find out that the killer… is a U.S. military guy who believes in the Constitution. Oh, did I just spoil Non-Stop? Oh, I should have said that there was a spoiler alert.”

Beck reported that the audience in NYC did not appreciate the plot twist.

“Here’s the thing: Even in New York City that got groans,” Glenn said. “Because you’re going through the whole movie, and it’s a good movie… [but] it’s not worth seeing once you know that they made the terrorist ex-military for the U.S… When it’s revealed, the audience in New York City went, ‘Oh, gee.’”

“It doesn’t even make sense,” Pat added. “And even the row of New Yorkers in front of us, I heard complaining about it after. For a second I thought I was in Texas. And I thought, no, wait! We’re in Manhattan!”

Ultimately, Glenn had a very simple message for anyone who was considering seeing Non-Stop this weekend: Don’t do it.

“Don’t see Non-Stop. It’s an insult. It’s an insult to anybody who believes in the Constitution and believes in our military,” Glenn concluded. “I said, ‘I make a promise to you: I will not treat our military the way we treated our Vietnam veterans.’ And we’re doing it now. We’re not taking care of their health, we’re dismissing them when they get back, and now we’re making them into our terrorists at our movies. And it’s the same weasely people that are doing it. Don’t go see Non-Stop.”

Not planning on it.