My daughter and I went to a pre-CPAC Ash Wednesday Mass at the largest Catholic shrine in North America – The Basilica of the National Shrine of the Immaculate Conception:

Then it was off to “RINOCon” the pre CPAC bloggers bash at Harrington’s. I took no pictures, but my picture was taken. Check out RWN on Monday when he does his annual CPAC picture dump.

Fast forward Thursday, and who do I run into but this guy passing out Atheist literature to CPACers  as they pass by in the hall. He was assuring everyone that it contained a “conservative” message, but I highly doubt that.. I’m assuming he’s from the group that was denied a booth in the exhibit hall. I witnessed one man take the brochure from atheist guy and promptly hand it back when he saw what it was. “Hey, it doesn’t burn!” the evangelical atheist said. Taking pity on him, I took one of his brochures, but soon lost it, alas.

Hey look! It’s Mark Levin! In the hallway! At CPAC!

Not sure what these storm troopers were doing there – you never know what you’re going to come across at CPAC.

I took this picture because I thought it was funny that there’s a big sign at CPAC that says, Radio Row sponsored by Koch Industries. (Suck-it Dingy.) Unfortunately my iPhone takes lousy pictures. If you squint you can almost see it. 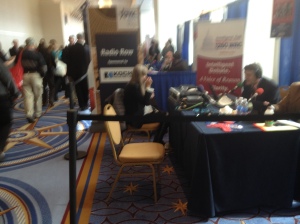 Lt. Col. Allen West spoke to conservative bloggers at Bobby McKey’s Dueling Piano Bar in National Harbor Thursday night after a busy first day of CPAC, telling us we are on the front lines of the culture war and thanking us for our service.

Reacting to the noisy, raucous, enthusiastic crowd, he started out by yelling “SHUT UP!” and later said, “lotta people gonna get a smack down from me!”

He concluded by telling bloggers “we need you to stand up and fight this culture battle against the left. Remember Andrew Breitbart, remember what he showed us. Every time you sit down at your computer, you’re carrying on the legacy that Andrew Breitbart taught us in the conservative movement.”

The 5th annual Blog Bash was a great success! 2014 had a stellar lineup of award winners:

The winning entry, “Aggravating Circumstances: Against the #FreeKate Campaign for Sexual Anarchy,” was to some degree motivated by my general disgust with politics. Readers may recall that the 2012 election caused me to announce that we are “Doomed Beyond All Hope of Redemption,” and nothing that the Republican Party has done in the past 17 months has inspired any greater confidence that politics can accomplish much. It is possible to summarize our problem in two words: Cultural Decadence.

The rest of the winners: 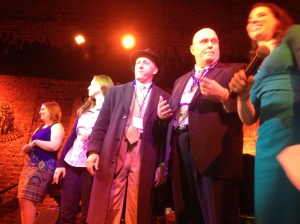 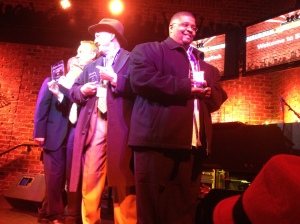 And down came the confetti:

At a lunchtime bloggers briefing, Republican powerhouses Phil Kerpin, Andrew Langer, and Ralph Reed explained how the right was able to collect over 140,000 signatures on regulations.gov opposing the malicious IRS 501 C 4 change in regulations. 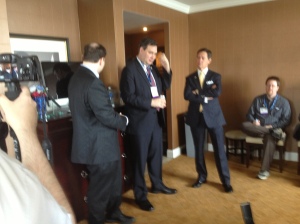 I’ll try to have the videos from that briefing up later tonight or later this weekend. Make no mistake. Those 140,000 signatures was no small feat and should keep the IRS busy for awhile. The right has finally figured out how to fight fire with fire.