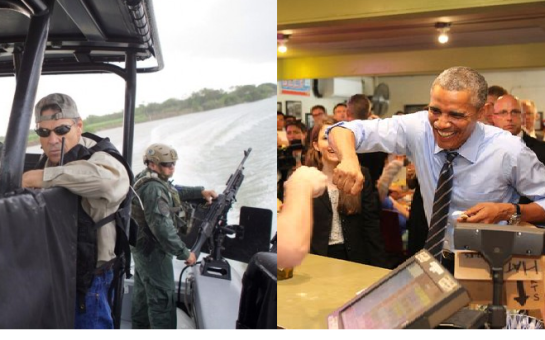 Perry toured the border Thursday, joining the Texas Department of Public Safety law enforcement officials for a boat ride down the Rio Grande. His office released this photo to the press.

When Perry met with Obama on Wednesday, he got the impression that the president didn’t know where the border patrol were stationed.

Texas Gov. Rick Perry last night told Fox News’ Sean Hannity that during his discussion with Obama Wednesday, he concluded that the president doesn’t even know where his own border patrol agents are situated, suggesting a gross lack of familiarity with the whole process.

We ought to be stopping people from crossing that border, not apprehending them after they get inland. And the president understood that. And, interestingly he did not know that. He – I’m comfortable that he was not knowledgeable about where his border patrol was stationed.

But President Preezy sure as heck knows where Austin’s  bestest BBQ restaurant is stationed.

“The Bear was loose” and his tummy was rumbling…as he yukked it up with “the folks” and did an awesome fist-bump with the cashier.

Colin Jacob, 25, and Jane Litvin, 23, were in town from Boston and Washington, respectively, and had gone to Franklin because they saw a TripAdvisor tweet declaring the restaurant’s barbecue the best in the country. They waited in line for two to three hours before they reached the cashier.

“And out of nowhere, Obama showed up,” Litvin said.

Jacob said the president seemed like a “people person.” Litvin, who shook hands with Obama, said his were “very soft.”

I hope he didn’t hurt his soft knuckles….

So which photo-op is cooler? Vote in the comments!

Via Twitchy: Obama was spotted on the border!:

What the heck?!?! MT @seanhannity Tonight more from the border and my interview with @GovernorPerry at 10pm #Hannity pic.twitter.com/1pQSlSN1Tl

7 thoughts on “Battle of the Photo-ops – Preezy vs Perry”