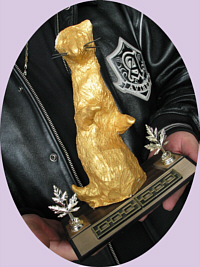 Dr. Thomas Frieden, director of the Centers for Disease Control!! 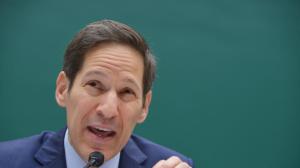 The Glittering Eye : for saying this  in an interview on Sunday about the nurse infected with Ebola in Dallas:

In other words he went out of his way to blame the patient, getting far out in front of what was actually known about the situation. He didn’t need to do that. He could’ve said something to the effect that they were very confident in their protocols and were exerting every effort to determine how this individual was infected and leave it at that. Now not only has he slammed the poor woman gratuitously, if it turns out that there’s a problem with the protocols he will have dealt a blow to the credibility of the CDC.
Arrogance and an uncaring attitude qualify him as a weasel.

Anyone who wonders where Dr. Frieden obtained this level of arrogance and clueless bureaucratic stupor needs only to look at his history.

His mindset was set in cement during his time at Oberlin College, generally conceded to be one of the more radical colleges in America. After graduating from Columbia Med School, and a stint at WHO, he enhanced his rep as a bureaucrat’s bureaucrat as Nanny Bloomberg’s very own chief health apparatchnik in New York City, responsible for implementing all of the onerous health regs, ‘sin’ taxes and similar liberty destroying programs.

Among other things, Dr. Frieden spent millions of NYC tax dollars on free condoms labeled with – wait for it – a map of the New York city subway system.

For someone who is referred to as an expert on communicable diseases, he continues to astound the world with some of his positions, such as his adamant opposition to a travel ban to the countries where Ebola is running rampant, and his silence on our open borders and some of the diseases illegal aliens have brought over the border with them. Nor did he protest back in 2010 when President Obama quietly abolished CDC quarantine regulations and programs designed to stop an Ebola outbreak here in America. In fact, it’s possible he may even have helped President Obama make that decision.

This is the same man who just today said during a telephone press briefing  that you can’t get Ebola by sitting next to someone on a bus…but that infected or exposed persons should not ride public transportation because they could transmit the disease to someone else.

I’m certain Dr. Frieden isn’t making obviously ridiculous statements like that to misinform the public because he’s under strict orders from the Obama White House to downplay this Ebola stuff until after the midterms.

After all, even though it’s a lot better from the standpoint of politics über alles to blame a nurse for ‘not following protocol’ (even though she insists she did) than to admit this Ebola thing has been  totally mishandled,I’m sure a dedicated health professional like Dr. Tom Frieden would never ever do anything like that.

Step up and get your richly deserved Golden Weasel, Doctor Friedman! Here ya go. Oh, that saliva or whatever it is on the base? I’m so sorry! The delivery guy was telling me about that grungy character he had to sit next to on the subway coming here. Just wipe it off with your handkerchief, OK?

Well, there it is!

Check back next Tuesday to see who next week’s nominees for Weasel of the Week are!

Make sure to tune in every Monday for the Watcher’s Forum, and  remember, every Wednesday, the Council has its weekly contest with the members nominating two posts each, one written by themselves and one written by someone from outside the group for consideration by the whole Council. The votes are cast by the Council, and the results are posted on Friday morning.

One thought on “Weasel Of The Week!!”