The National Abortion Rights Action League can take a bow.

Their radio ad predicting a dystopian condomless future in which Science-Denier Cory Gardner (who is running for the Senate in CO against Mark “Uterus” Udall) has outlawed contraceptives, easily earns the award for dumbest political ad of the season.  It’s dumber even than anything Wendy Davis has put out there (including the loathsome wheelchair ad) and that’s saying something.

The ad seeks to deceive low info young women with “war on womeny” hysteria – rather than educate them with the truth. It is a massive insult to their intelligence.

The ad begins with some dude “mansplaining” to his ignorant girlfriend  “a near future in which Cory Gardner has banned birth control leading, somehow, to a complete unavailability of condoms and also college tuition.”

As John Sexton notes at Breitbart.com, “Cory Gardner has been running since June on a platform to make birth control pills available over-the-counter, i.e. without a prescription. I’m not sure how making something available more easily is tantamount to banning it.”

But that’s only one of  of the ad’s many problems with truth, logic, style, etc. Hit the link for Sexton’s humorous take on the rest.

Women in Colorado should be offended. And Mark Udall should be embarrassed that such a ridonkulous ad was put out there supporting him. 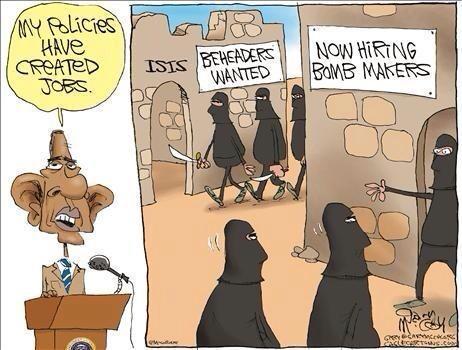 Just goes to show you that Hillary Clinton wasn’t entirely mistaken. Not all jobs come from corporations and small business!With the midterms a week away, I think it’s only fair to look at the jobs President Obama’s policies have created, don’t you?

This week, Big Jolly Politics, The Elder Of Ziyon, The Political Commentator and Le·gal In·sur·rec·tion earned honorable mention status with some great articles.

To bring something to my attention, simply head over to Joshuapundit and post the title and a link to the piece you want considered along with an e-mail address (mandatory, but of course it won’t be published) in the comments section no later than Monday 6PM PST in order to be considered for our honorable mention category. Then return the favor by creating a post on your site linking to the Watcher’s Council contest for the week when it comes out on Wednesday morning

It’s a great way of exposing your best work to Watcher’s Council readers and Council members while grabbing the increased traffic and notoriety. And how good is that, eh?

So, let’s see what we have for you this week….