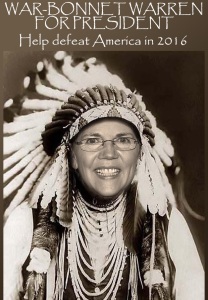 She talks up how important “transparency” is to the lying grifter Obama. When asked if she would fire someone conducting all of his business on private email, she declines to answer that “hypothetical.”

As I’ve been saying – the powers that be want to clear the decks for Indian Princess Elizabeth Warren.

Flashback to Ed Klein last July in the NY Post: This means Warren: Obama backs challenger to Hillary: (Poo pooed at the time.)

Publicly, Obama has remained noncommittal on the 2016 race, but privately he worries that Clinton would undo and undermine many of his policies. There’s also a personal animosity, especially with Bill Clinton, that dates from their tough race six years ago.

A former Harvard law professor and administration aide, Warren would energize the left wing of the Democratic Party just as Obama did against Clinton in 2008.

Thanks to her outspoken stand against big banks and the top 1 percent, Warren is the darling of progressives. She won her Senate seat thanks to millions of dollars in donations from outside Massachusetts, including from rich environmentalists and Hollywood celebrities.

5 thoughts on “What Did I Tell You?: Valerie Jarrett Offered Chance to Defend Hillary Clinton, Declines”