On day two of the Baltimore riots, the inept city government was still giving the rioter, looters and pillagers “the space to destroy.”

Via Colin Flaherty, who says this is his favorite moment from the riots, last night:

And here via AoSHQ, is the unlucky owner of the liqueur store that was in the unfortunate “destroy” space.

Owner of a liquor store is taking me through his destroyed shop. The owner, crying, says "I'm done. Never again." pic.twitter.com/MJvBPbQWgY

Reporters asked the governor of Maryland why he was so slow to send in the National Guard.

Some questioned why it took so long for the Guard to be activated, to which Hogan responded that Mayor Stephanie Rawlings-Blake was slow to make the request. He said he executed the request 30 seconds after it was made. Rawlings-Blake had initially said she wanted to give to protestors the “space to destroy” their environment….

“When the mayor called me, which quite frankly we were glad that she finally did, instantly we signed the executive order. We already had our entire team prepared,” he said. “We were trying to get in touch with the mayor for quite some time, she finally made that call and we immediately took action.”

Last Fall,  the Democrat Governor of Missouri was accused of holding back the National Guard (at Holder and Obama’s request) when the city of Ferguson was in flames. Now we have Democrat politicians in Baltimore doing the same stupid thing – and you have to wonder – are they getting orders from above – or is this kind of toxic stupidity endemic throughout the party? Or both?

Yeah. As I noted at PJ Tatler. This is the kind of incompetence and insanity you can count of when progressives are put into positions of power.

Whether it’s a big-city mayor giving common street thugs posing as protesters “space” to destroy a city, or the leader of the free world giving radical Islamists “space” to destroy entire countries —  what you get is chaos, terror, bloodshed and tears.

It’s time once again for the Watcher’s Council’s ‘Weasel Of The Week’ nominations, where we pick our choices to compete for the award of the famed Golden Weasel to a public figure who particularly deserves to be slimed and mocked for his or her dastardly deeds during the week. Every Tuesday morning, tune in for the Weasel of the Week nominations!

Here are this weeks’ nominees….

The Noisy Room : My nomination this week is Mitch McConnell for his betrayal to conservatives once again by pushing for the confirmation of Loretta Lynch as Attorney General.

Mitch McConnell bald-facedly lied in October. While he was wooing conservatives for the upcoming midterm election, he stated that any nominee that was going to replace Eric Holder as “the nation’s highest law-enforcement official” must, “as a condition of his or her confirmation,” avoid “at all costs” Holder’s penchant for putting “political and ideological commitments ahead of the rule of law” — including as it “relates to the president’s acting unilaterally on immigration or anything else.” He fibbed big time and betrayed conservatives nationwide. It was his wheeling and dealing that led to the deal that was struck with Harry Reid and that cinched Lynch’s confirmation.

Here’s Mitch McConnell’s deal: If Democrats agree to stop blocking a human trafficking bill over some boilerplate language regarding abortion funding — a position that made them look unreasonable — Republicans, with all the leverage imaginable, will help confirm another attorney general nominee who will rubber stamp the president’s many overreaches. So, you see in the end, the Republicans voted for the continuation of the abuse of Executive power. It’s really just that simple. The reasons given for supporting Lynch included that she was a black woman and the best so far to come out the Obama White House – those are two breathtakingly horrible reasons for Lynch to be confirmed. It’s absolutely shameful politicking.

If you didn’t think Mitch McConnell was a lying, conniving Progressive before… you should now. Once the November election was won and behind him, McConnell went to work behind the scenes to whip up support for Loretta Lynch. He wielded his power from the shadows and strong-armed others into supporting her. By voting for her confirmation, he summarily flipped off any conservative who had been foolish enough to believe his campaign rhetoric. Suckers. 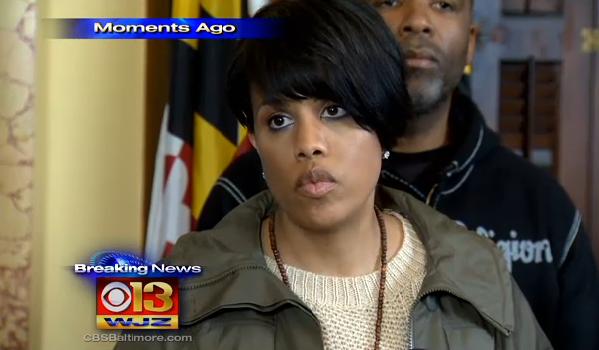 Virginia Right! : this week the clear choice for Weasel of the Week is Baltimore Mayor Stephanie Rawlings-Blake.

Her statement to the potential looters and rioters was a green light to rape, pillage and burn the city. This was both irresponsible and reprehensible. And as we sat there in front of the television watching the police try to block the stones and bricks being thrown, obviously forbidden to respond, it left most with a sick feeling in their stomach.

She said she wanted to “give space to those who wished to destroy.” One can only hope that her career is also destroyed by that stupid statement.

The Independent Sentinel :The Mayor of Baltimore, Stephanie Rawlings-Blake, is my selection for two weasel statements in one press conference. First, she thanked the anti-white, anti-Jewish, anti-American Nation of Islam for maintaining order, and second she said she “gave those who wish to destroy space to do that as well”.

Don Surber : Mustela Baltimoron mayorus Stephanie Rawlings-Blake for giving rioters, arsonists and looters a space of their own. Her actual words:

“I made it very clear that I work with the police and instructed them to do everything that they could to make sure that the protesters were able to exercise their right to free speech. It’s a very delicate balancing act. Because while we try to make sure that they were protected from the cars and other things that were going on, we also gave those who wished to destroy space to do that as well. And we worked very hard to keep that balance and to put ourselves in the best position to de-escalate.”

Oberlin graduate! Need we say more? It takes a certain kind of cowardice to stand up to a crowd of lawless outlaws and say, “Do what you want to the girl, but leave me alone.”

Nice Deb :The Mayor of Baltimore,Stephanie Rawlings-Blake gets my vote for dumbest quote of the week:

“It was a very delicate balancing act because while we tried to make sure that they were protected from the cars and the other things that were going on — um — we also gave those who wished to destroy, space to do that, as well,” Rawlings-Blake said in all seriousness during a press conference, Sunday.

The weaseliness came during the obligatory walk-back, Monday afternoon:

“I’ll say the very blatant mischaracterization of my words was not helpful, today. I was asked a question about the property damage that was done, and in answering that question, I made it very clear that we — balanced a very fine line between giving protesters – peaceful protesters – space to protest. What I said, was, in doing so – people can hijack that and use that space for bad. I did notsay that we were accepting of it. I didsay that we were passive to it. I was just explaining how property damage can happen during a peaceful protest. It is very unfortunate that members of your industry decided to mischaracterize my words and try to use it as a way to say we are inciting violence.”

Because she didn’t want to admit that she made a mistake or misspoke, she blamed the media for “mischaracterizing” what she clearly said. This makes Stephanie Rawlings Blake is the very personification of the word, weasel.

The Right Planet : Milwaukee District Attorney John T. Chisholm has been accused of a vicious political witch hunt, authorizing predawn suburban raids against conservative targets. Armed police using battering rams smashed in doors and raided homes, seizing computers, phones, even a child’s iPad. Empowered by a rubber-stamp judge, Barbara Kulka, partisan investigators seized massive amounts of personal e-mails and other electronic messages. The targets of the raids were told to keep quiet. Chisholm allegedly told a fellow prosecutor that his wife’s weeping complaints about how Gov. Scott Walker’s policies would apparently hurt her union motivated him to launch a personal vendetta against Walker’s staff and 29 conservative nonprofits for years. None of the targets of the searches were ever convicted of a crime. The courts found Chisholm had no legal basis for his “chilling” heavy-handed “John Doe” investigations. But it appears Chisholm is so thin-skinned and unhinged over all the recent criticism of his fascistic tactics that he suggested on Saturday Gov. Walker should be criminally charged with defamation for criticizing him.

Well, there it is. What a despicable group of  Weasels…ANY OF THEM COULD WIN! Check back Thursday to see which Weasel walks off with the statuette of shame!