Yes, once again, It’s time to present this week’s statuette of shame, The Golden Weasel!!

Every Tuesday, the Council nominates some of the slimiest, most despicable characters in public life for some deed of evil, cowardice or corruption they’ve performed. Then we vote to single out one particular Weasel for special mention, to whom we award the statuette of shame, our special, 100% plastic Golden Weasel. This week’s nominees were all particularly slimy and despicable, but the votes are in and we have our winner…the envelope please…

Nice Deb : New York Daily News columnist, Linda Stasi, has been accurately described as a “foul, disgusting liberal.” One could also argue that she is a particularly repellent weasel.

The aptly named columnist “blamed of the victim” and engaged in gross moral relativism in her horrific Dec. 6 article asserting “that the interaction between ‘two hate-filled, bigoted municipal employees’ led to the deaths of ’13 innocent people’ who were killed in an act of “unspeakable carnage.”

The post’s title read: “San Bernardino Killers Were ISIS-Loving Monsters — But One of Their Victims Was Just as Bigoted.”

One man spent his free time writing frightening, NRA-loving, hate-filled screeds on Facebook about the other’s religion.
The other man quietly stewed and brewed his bigotry, collecting the kind of arsenal that the Facebook poster would have envied.
“What they didn’t realize,” she stated, “is that except for their different religions, they were in many ways similar men who even had the same job.”

What an absolutely repulsive weasel this Stasi creature is.

Repellent isn’t the word for it. You have to wonder about the sanity of people like this. Among other things, the major difference between the men is that one of them was a cold blooded murderer and his victim wasn’t, but try telling that to this creature!

But in terms of the weaselness which we commemorate here, Ms. Stasi is perfect. She has her morality disengaged and will twist, warp and/or excuse anything as long as it helps the Cause, even if it means dragging a murder victim’s name through the mud before his corpse is even cold and while his family is still in mourning.

Like many of the Weasels we give awards to here, she’s one of those enemies inside the gates we have to be very concerned about, especially since she has such a public megaphone.

Enjoy your weasel Ms. Stasi. I have no doubt you will continue to be worthy of it.

Well, there it is.

Check back next Tuesday to see who next week’s nominees for Weasel of the Week are!

Make sure to tune in every Monday for the Watcher’s Forum, and remember, every Wednesday, the Council has its weekly contest with the members nominating two posts each, one written by themselves and one written by someone from outside the group for consideration by the whole Council. The votes are cast by the Council, and the results are posted on Friday morning.

It’s a weekly magazine of some of the best stuff written in the blogosphere, and you won’t want to miss it…or any of the other fantabulous Watcher’s Council content.

It is safe to say Egyptian TV host Ahmed Moussa is not a fan of Barack Obama.

In response to the December 2 San Bernardino terror attack, Moussa said that he suspected that Obama was “connected to the terrorists who carried out the attack,” and added: “They should take Obama and stick him on an impalement rod. This is what they would do in a respectful country.” Moussa’s rant aired on the Egyptian Sada Al-Balad TV channel on December 5.

Muslims throughout the Middle East, but especially Iraq and Syria –  blame Obama for the rise of ISIS.

Egyptians have a special disdain for this president because of that – and because of his administration’s support for the reviled Muslim Brotherhood, which they threw out on their asses in June of 2013.

Obama’s ambassador to Egypt, Ann Patterson was especially reviled for her support for ousted terrorists. 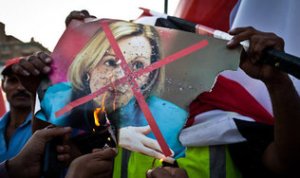 If one follows the Egyptian media, however, one discovers that the reasons Egyptians dislike Patterson are many and unambiguous.

Last week, for example, El Fagr reported that, during their most recent phone conversation, Patterson demanded that Egypt’s recently appointed Supreme Commander of the Egyptian Armed Forces, General Abdul Fatah al-Sisi, release all Muslim Brotherhood members currently being held for questioning: “And when Sisi rejected this order, the American ambassador began threatening him that Egypt will turn into another Syria and live through a civil war, to which Sisi responded violently: ‘Neither you nor your country can overcome Egypt and its people.'”

Earlier, Patterson was reported as “trying to communicate with General Sisi, demanding dialogue with the leaders of the Muslim Brotherhood, and concessions to them,” to which Sisi reportedly retorted: “Stop meddling in our affairs… the Egyptian people are capable of looking after their own welfare.”

These are just the latest samplings from Egypt concerning the ambassador’s attempts to reinstate the Brotherhood to power. The day before the fundamentalist Salafi “Nour” party withdrew from negotiations with Egypt’s interim government, Al Nahar reported that Patterson had “incited them [the Salafi Nour Party] to tamper with the political scene and the road map and to threaten to withdraw from political participation if Dr. Muhammad Baradei becomes elected as Prime Minister…”

There is also widespread belief that Patterson’s “meddling” in Egypt’s affairs is not limited to General Sisi and the Egyptian media. Several of Egypt’s revolutionary forces, including Tamarod, which played a pivotal role in the June 2013 revolution, are preparing to stage aprotest in front of the U.S. embassy in Cairo “calling for the ejection of ambassador Anne Patterson.”

Naturally, Obama was so pleased with her work in Egypt, she was promoted to be the Assistant Secretary of State for Near Eastern Affairs.

That is what the five year old looked like when her house was set ablaze by an arsonist (or arsonists.)

She is the sole survivor of the ferocious house fire that ravaged her home in Schenectady, NY during the early morning hours of May 2, 2013, claiming the lives of three of her siblings and her father. (This monstrous crime is still unsolved).

When firefighters found Safyre in what was left of her New York home, she was clutching her father’s chest, who saved her life, but couldn’t protect her from all of the flames.

Sa’fyre suffered complications from severe burns over 75% of her body and both her right hand and left foot had to be amputated.

Sa’fyre’s left foot will be amputated from below the knee. “Stunned doesn’t begin to express all we we’re feeling hearing this. By the grace of God Sa’fyre was distracted and not understanding what the doctor was explaining to us… Her left foot is not growing properly and it is the same foot that she had toes amputated from previously. Her foot has no range of motion, no movement at all!”

Although Sa’fyre is currently unaware that this procedure will take place soon, her family has been preparing her the best way they can with Sa’fyre stating that she wants a prosthetic foot so that she can run and play with the other kids!

In March of 2015 she was fitted with a prosthetic leg.

Now her community is rallying around the brave little girl to ask for folks across the world to send her Christmas cards to ensure that this year gets a little bit cheerier for Safyre who has already been through so much.

“Safyre lost everything—her father, her mother, her sister, her brothers, her home, her favorite toy, her favorite outfit — everything that was familiar to her,” Liz shared. “She even lost the one thing we all take for granted—her reflection. But she wakes every morning with a smile on her face. She is the true definition of hope, faith and love.”​ 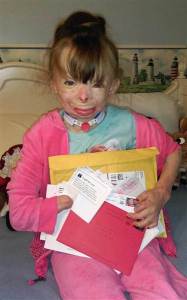 I think we can do this:

I hope this little girl is deluged with so many Christmas cards, her auntie has to rent a storage locker to keep them all in.

A crowdfunding donation page has been set up for Safyre, here.

Take it away Sandler and Young: