Sarah threw out the red meat as only she can at  the Faith and Freedom Coalition to in Washington DC, today.

She skewered Obama voters, the NSA, and Washington culture in general, even throwing in a good-natured elbow to her ” good friends” at Saturday Night Live:

“It seems so Orwellian around here,” Palin said. “Before 1984, terms like ‘leading from behind’ meant following. The other day the White House testified before Congress, bragging that they used the ‘least untruthful statement.’ Where I come from that’s called a lie.”

“Yes, officials lied, and government spied,” Palin rhymed. “In Benghazi, government lied, and Americans died. These scandals are coming at us so fast and furious.”

“It reminds me of a comedy bit from my really, really good friends at Saturday Night Live,” Palin said. “They should think of me as a friend, for a while I was supplying more job security for the Tina Feys of the world and doing more for those employment numbers than Obama’s ever done.”

Palin proceeded to do her best Amy Poehler impression.

“Our government spied on every single one of your phone calls,” she said, “but it couldn’t find two pot-smoking deadbeat Bostonians with a hotline to terrorist central in Chechnya. Really? And it’s built apparatus to sneak into all of the good guys’ communications, but oopsy-daisy! It missed the Fort Hood mass-murder of our own troops, despite this Islamic terrorist declaring his ideology in numerous army counseling sessions and on his own business cards. But no red flags there. Really?”

Palin also asked Reed to sic her on any protestors outside the conference. “Easy to spot them in the parking lot, in their itty-bitty purple Volts,” Palin said. “What gives them away is that Reelect Obama bumper sticker. That bumper sticker might as well say, ‘Yeah, I’m still dense.'”

I was pleased to hear Palin will soon be returning to Fox News.

Fox News Chairman and CEO Roger Ailes said Palin, a former Alaska governor, will return on air Monday morning during the Fox & Friends program. She will also contribute to the Fox Business Network.

“I have great confidence in her and am pleased that she will once again add her commentary to our programming,” Ailes said in a story posted on the Fox News website. “I hope she continues to speak her mind.”

Palin is quoted as saying, “The power of Fox News is unparalleled. The role of Fox News in the important debates in our world is indispensable.”

…how the scandals are taking a toll on the Regime.

Sarah Palin swooped into Missouri this weekend with her family to campaign for US Senate candidate Sarah Steelman, who’s currently trailing behind frontrunners John Brunner, and Todd Akin. With temperatures 50 degrees warmer in MO than the climate she’s used to in Alaska, she remained as cool as a cucumber on the stump.

Steelman, in a speech introducing Palin, said she would “kick the door down” on the Republican establishment, and pledged not to be part of the “good ol’ boy’s club.”

After speaking, the two served food and posed for photos with supporters.

In an interview after the event on Friday evening, Steelman said she had never before met Palin. The endorsement came last month after Steelman sent Palin a letter seeking her support, she said.

Riding a four-endorsement winning streak in Republican Senate primaries this year, the former Alaska governor swept into a blueberry patch outside Kansas City this weekend looking to apply her Midas touch to the latest fortunate recipient. This time it’s Sarah Steelman, a former state treasurer running in a fractured Missouri Tuesday primary to decide who gets to take on vulnerable Democratic Sen. Claire McCaskill in November.

With Steelman, Palin is making perhaps her boldest bet yet. Steelman — who, like Palin, likes to hunt, staunchly opposes abortion rights and touts herself as a maverick — has been running third against businessman John Brunner, who’s poured millions of his personal fortune into the race, and six-term Rep. Todd Akin.

At least that was the case before Palin’s arrival and the ensuing glut of media exposure for Steelman.

“They fear her,” Palin told a few hundred people gathered at a sprawling farm a few miles from the Kansas border Friday night. “She’s the candidate in this race who scares them because she won’t go to Washington to just go along, to get along. You have that choice to choose, results over rhetoric. Convictions over consultants and Missouri over Washington.”

A win would only enhance Palin’s reputation as the most powerful down-ballot force in Republican politics.

I would have loved to have been there to videotape the event, but I’ve been in South Florida all summer. I’m sorry I missed it.

Here’s some raw video, taken by one of the attendees, muahdib4 (h/t Charles B):

Here is some video I took of Sarah Steelman speaking a the Tea Party “Express stop, last May: Pix and Video: The Tea Party Express Swings Through Grain Valley, MO:

Sarah Steelman, one of the frontrunners in the Missouri Senate race,  gave a very good speech. In it, she slammed the Senate for its failure to produce a budget, and suggested we cut their salaries until they cough one up.

A trip to India and Israel is a good first step  for a potential presidential candidate seeking acceptance on the world stage. Sarah Palin gave  a very well received speech in India, and met with the Prime Minister Of Israel. Her trip overseas went very smoothly, and bolstered her foreign policy credentials. The experience should be considered a net positive for her.

But no – the left won’t give Palin that. She can’t even take a trip Israel without them sniping at her, ridiculing her with anti-Christian slurs, and sounding like frantic poor-sports freaking out because a longtime Dem constituency seems to be turning away from them. Everything about her is “weird” and scoff-worthy.

I’m almost sorry to lay this on you – it’s hard to listen to grown men sounding like this:

CHRIS MATTHEWS, HOST: This coalition between the Right and Israel, the evangelical right in the United States, is not founded on personal friendships or anything like that, or even values. It’s founded on some sort of weird, rightwing thing where you just high five each other there at the Western Wall and then that’s done, they’re trip.

DAVID CORN, MOTHER JONES: But there is a theological component which Gene was referring to…

CORN: …Which is there’s a certain brand of evangelical Christians who believe in Revelations, that Armageddon is coming, and that will happen in Israel basically.

MATTHEWS: If they hold the West Bank.

CORN: If they hold, well there’s a lot of different components to that, but that’s why they like Israel. That’s why they want Israel to be strong. It’s not because…

CORN: Right. It’s not because they like Jews or Israelis.

Sarah Palin was mobbed by paparazzi after she visited the Western Wall tunnels in Israel, on Sunday.

Aaron Klein reported for Fox News, this morning, that although most Israelis have never heard of Palin, they know she’s pro-Israel, and they appreciate that: 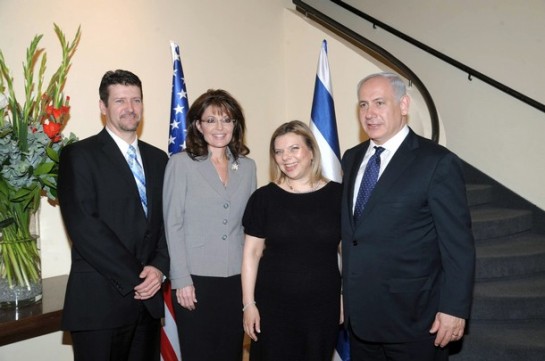 AFP reports on her dinner with Netanyahu:

Sarah Palin, darling of the US Republican right, joined Israeli Prime Minister Benjamin Netanyahu for dinner at his Jerusalem residence on Monday on the second day of a “private visit” to Israel.

The meeting, at which the two were accompanied by their spouses, was off-limits to the media, and Netanyahu’s office did not immediately publish any statement.

A photograph released by the Israeli Government Press Office showed the two couples standing in front of the Israeli and United States flags in the residence.

The former Alaska governor arrived on Sunday afternoon with her husband Todd and went straight to Jerusalem’s walled Old City where she visited the Western Wall, the most sacred site where Jews are allowed to pray.

Palin plans to visit Christian sites in Northern Israel before she leaves the country, tomorrow.  AFP reports that she plans on returning in the coming months for “an official visit”. Wonder what that’s all about…

Legal Insurrection: “Why are you apologizing all the time?”

With that single sentence made to her Israeli hosts, Sarah Palin demonstrated a greater understanding of the problems confronting Israel than the collective wisdom of all the J.D.’s, Ph.D’s, and Masters of International Affairs in the Obama administration combined.

The question was profound, as simple as it were, because it addressed the narrative of perpetual Palestinian victimization and grievance.

Video of The Palins meeting with the Netanyahus via Gateway Pundit:

Linked by Free Republic, and Michelle Malkin, thanks!

“At a time when New Mexicans are struggling to make ends meet, their governor should not be leading a life of privilege,” Martinez said in January. “We will get rid of that ultimate symbol of waste and excess; we will sell the state’s luxury jet.”
Former Governor Bill Richardson bought the Cessna Citation Bravo in 2005 for $5.5 million and [state General Services Secretary] Burckle said he is listing it at $3.3 million.

Martinez, who during the campaign pledged to sell the state jet and criticized aircraft use by the previous administration, hasn’t set foot on a government plane since taking office Jan. 1.

She has been traveling around the state in a government-provided Ford Expedition with a desk in the back seat.

The Washington Post reported that Palin, on her first trip to India, said she is still mulling over a 2012 run.

Speaking to a hand-picked, elite audience of Indian business tycoons, lawmakers, Bollywood stars, lobbyists and socialites at a packed media conference in New Delhi, Palin deftly handled the question on everyone’s minds: whether she would throw her hat in the ring in 2012.

“I am thinking about it,” said Palin, who fielded at least three questions on the subject. “I don’t think there needs to be a rush . . . I want to find out who else is going to put their name forward in service.”

This speech has got very high marks from Jim Hoft, who posted the live-stream at Gateway Pundit.

I’m just now getting around to listening to it, and  it does sound strong:

If you remember, liberal pundits, (at Obama’s beckoning), lamely tried  to label Obama’s  State of the Union speech, as “Reaganesque”. Of course, it was nothing of the sort. It was the usual boring, cynical,  insincere pack of Obamalies and hopeytales.

Sarah Palin, however, without even trying – simply by being who she is – fit’s the bill.

The Hill has more news on Palin in India:

When asked about the greatest lessons she learned from 2008, Palin did not mention the friction between McCain’s camp and hers. Instead she said the experience informed her public relations strategy.

“One thing I learned is that you cannot trust the mainstream media to accurately report on [your record and accomplishments],” she said. “You have to have the boldness, the courage to set the record straight yourself.”

She even accused Republicans of not defending their records vigorously enough.

“Too often, Republicans have the fighting instinct of sheep sometimes,” she said. When it comes to correcting the record, “I will put my foot down.

Rebutting a criticism often used against her, Palin said, “It’s not victimization, I’m not playing the victim card.

She’s been criticized on both sides for sticking up for herself – most recently on the Republican side, by  Roger Ailes.

Linked by Michelle Malkin in Buzzworthy, and sisu, and The Powers That Be, thanks