I do solemnly swear (or affirm) that I will support and defend the Constitution of the United States against all enemies, foreign and domestic; that I will bear true faith and allegiance to the same; that I take this obligation freely, without any mental reservation or purpose of evasion; and that I will well and faithfully discharge the duties of the office on which I am about to enter: So help me God. 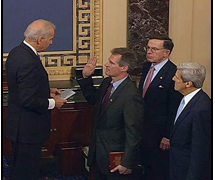 An oath.  73 words.  Defined as “a formally affirmed statement or promise accepted as an equivalent of an appeal to a deity or to a revered person or thing; affirmation.”  And something serious to many, but not all.

It is easy to get lost in the horror of what madness can do.  In the world of a 24 hour news cycle, people can often find themselves barely treading water in the rushing tide of blood libel unleashed by partisan media hacks pretending at neutrality and sanctimony, but we have the right to expect better of a select group among us.  These are the people who put themselves forward as qualified to represent us, and they are set apart by the duty that we trust them with.  It is good to remember that no one is perfect.  Humanity at its best will still be flawed.  Mistakes will be made, judgment will be clouded.  Nevertheless, if one accepts the public trust, then one also has a minimum obligation to not to betray it.

And yet this is exactly what has happened in the wake of the attempted assassination of Representative Gabrielle Giffords, as several of her contemporaries have proposed legislation that offends the freedoms guaranteed by the document that they swore to support and defend.

One day after this tragedy, Congressman Robert Brady proposed legislation that would make it a Federal crime to to use language or symbols that could be perceived as threatening or inciting violence against a federal official or member of Congress.

“Perceived as threatening” casts a very wide net.  And then there is that little matter of the First Amendment that very plainly states “Congress shall make no law…abridging the freedom of speech, or of the press…” .  In Congresses past, Representative Brady might have had an excuse for forgetting such a plainly written prohibition, but seeing as we were still on a media hue and cry about the stupidity/waste of time/waste of money that occurred when the incoming Congress read the Constitution and Amendments just last week when a mentally ill man succumbed to his urges, it seems to me that he loses this excuse. Maybe the Representative was in the rest room when the part of the Constitution that he is rushing to assault was read?

He isn’t alone in this attack on a Constitutional pillar of our society.  Representative Jim Clyburn has also taken up arms with his proposal to revive the long-dead “Fairness Doctrine” to insure standards to guarantee balanced media coverage.  Even if I thought he meant it, I can see that what he proposes will hinder free speech, and since I’m fairly certain that his idea of “balanced” and mine are not the same thing, I’m even less in favor of such a proposal, especially since the Democrats’ preferred method of achieving such goals is to altogether forego the legislative process and go straight to regulation by government agency.  Having someone else do the dirty work at his suggestion doesn’t relieve him of the oath that he took, either.

These two are not alone, however.

Representative Peter King has decided that further restrictions on firearms are an appropriate response:

“It is imperative that we do all that we can to give law enforcement the tools they need to ensure the safety of New Yorkers and prevent an attack before it happens,” King said at a news conference with New York City Mayor Michael Bloomberg. “That is why, as chairman of the Homeland Security Committee and co-chair of the Congressional Task Force on Illegal Guns, I will be introducing legislation that would make it illegal to knowingly carry a gun within a 1,000 feet of certain high-profile government officials.”

Now I would be hard-pressed to think how this law would prevent an insane loner who thinks that he is being controlled by grammar from deciding that he is going to take a shot a Representative or Senator, but I can see that law-abiding citizens could get caught up in nebulous enforcement of “knowingly” carrying too close to a government official.

I suppose that we could think of this as a test.  They failed, and its good that we know that now, because it tells us something important.  These are people who by virtue of their position will be looked to for leadership.  Emergencies and crises are trying times for all.  That does not excuse forgetting their primary duty.  And either by accident or design, these repositories of the public trust have either let themselves get carried away in the hysteria rather than remaining calm and providing an example to others, or they have seen an opportunity, and chose to act like people who rule, rather than people who govern.

Congress is a place where it is possible to find fame.  There are those who have walked its halls, and are remembered as legends, and those who should be, and this is why it is easy for their focus to become misplaced.  But in truth, the real stars of this process are the American People.  They are the ones who, election after election, preside over a peaceful transition of power, regardless of the rhetoric or its tone, and present an example for the rest of the world, where change is often accompanied by bloodshed.   This can only be possible because of the genius of the Constitution, and the freedoms it guarantees.

Anyone who lets themself get carried away by emotion to the degree that they would assault what they swore to protect fails those whom they represent.  Anyone who purposely designs against it after undertaking the responsibility to defend it shows a contempt for the people who entrusted them with the duty, and an unforgivably cynical outlook by asking for that trust in the first place.

While it is disappointing to have members of a new Congress that is more filled with promise and an emphasis on the right things than we have had in a long time, we are fortunate that these failures have occurred so early, because it gives these Representatives ample time to redeem themselves, and us time to seek others to fill their offices if they don’t.

I’ve refrained from commenting on Paul McCartney’s self-beclowning in the East Room at the White House, Wednesday night, because, frankly I was so disappointed that the  more conservative half (or so I thought) of the brilliant Lennon/McCartney songwriting team turned out to be, well…not so conservative. I probably should have known that, but I rarely pay attention to show biz news.

He apparently spent much of the night engaging in an embarrassing, (and now out of vogue),  leg tingling, obsequious manner:

McCartney literally gushed over President Obama throughout his East Room concert.  “Getting this prize would just be good enough, but getting it from this president…” McCartney said letting his praise trail off as if there were vast volumes left unsaid.

And to add insult to injury, his thoughtless, cheap shot at President Bush could not be further off the mark:

“After the last eight years, it’s great to have a President who knows what a library is,” McCartney quipped.

As Mark Hemingway pointed out at the Washington Examiner:

…it would also be good to have White House guests who knew that the former president’s wife has masters degree in library science and worked as a librarian. There’s even a grant program at the Institute of Museum and Library Services called the “Laura Bush 21st Century Librarian Program” which awards grants of up to $1 million. Here’s the bio from George W. Bush’s archived presidential webpage — “Laura Bush: Librarian and Teacher.”

We get it. You think the former President is dumb. But Bush and his wife in particular have done a lot to support literacy and libraries. The joke would be in poor taste on any occasion, but it’s made worse by revealing McCartney’s own ignorance.

An unamused John Boehner made the following statement :

“Like millions of other Americans, I have always had a good impression of Paul McCartney and thought of him as a classy guy, but I was surprised and disappointed by the lack of grace and respect he displayed at the White House,” Boehner told HUMAN EVENTS.  “I hope he’ll apologize to the American people for his conduct which demeaned him, the White House and President Obama.”

What was he even thinking? Why would he so carelessly tarnish his own legacy? Doesn’t he realize that  large numbers of Americans are reeling in disgust by his behavior?

Frankly, I don’t care if he apologizes or not. He has revealed to the world what a small, foolish man he is.

I was once a huge fan…but now, to quote Mr. Darcy: My good opinion once lost, is lost forever.

Linked by Michelle Malkin in Buzzworthy, Villainous Company, thanks!

Go inflate your own tires!

Poor James and the Swamp Crows

Historic. She absolutely nailed it:

This race is now McCain’s to lose.

Reactions to the speech at Ace of Spades HQ, where you can add your own creative description, such as:

SHOW YOUR SUPPORT FOR PALIN!

RightWingSparkle has started the website, PROUD OF PALIN with the sole purpose of publishing letters of support for Governor Palin. After a short while, she will be sending the letters directly to her, so get busy! 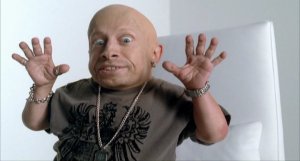 I think I speak for most everyone in the blogosphere when I say, thank God, Verne Troyer, (aka “Mini me”) has put a temporary stop on distribution of that sex tape featuring him and his ex-girlfriend:

Kudos to Judge Gutierre for that excellent ruling. If I saw one more picture of him and his tongue with that woman….blechhh!

That would be Cotillion blogger Jane Novak, of Armies of Liberation, and The Jawa Report, who was recently the subject of that New York Times article about her “crusade” to free Yemani journalist, Abdul Karim al-Khaiwani.

You can still sign the online petition on al-Khaiwani’s behalf, here.

Some inside the ballpark T.V. gossip:

…are you ready for it?

You heard it here, first.