Megyn Kelly had Col Ralph Peters on her show last night to respond to the several tons of excrement Bill Ayers shoveled during his recent interview with Kelly.

For instance, the Weather Underground claims they did what they did because the US Military were killing 6,000 people a week during the Vietnam War. Kelly asked Peters if that was true.

“No,” he responded matter-of factly. “It’s simply not true. That’s a figure the hard left just pulled out of thin air.” He continued to note that Vietnam was a long and brutal war, and it’s true that a small number of Americans were involved in atrocities, for which they paid dearly. But the enemy Vietnamese – the Viet Cong – committed vastly more atrocities. “This notion that we just went there and slaughtered innocent civilians right and left – that’s the Oliver Stone version of history.”

Peters went on to express his dismay that leftists have taken control of the education system, and are peddling this garbage to our kids.

“You’re going to hear a lot more of that version of history because conservatives made a huge mistake in the past 50 years  by abandoning the educational system – K through 12, university and grad school – to the hard left. The result he says, “is a generation of young people who know the Bill Ayers side – but not the facts.”

The now agitated Peters, added, “by the way – it’s time people stopped insulting Vietnam Veterans. They were not monsters and butchers and baby killers. They were young men serving their country when the likes of Bill Ayers, wouldn’t.”

In response to Ayers proclamation that we should build monuments to deserters like Bowe Bergdahl, Peters said, “Since 1775, Lexington and Concord –  for 239 years –  good men and brave men have given their lives – so Bill Ayers could have the right to be a horse’s ass – and he is.

Peters noted that Obama’s handling of the Bowe Bergdahl affair – treating him like a returning hero, while ignoring genuine American heroes – was “pure Bill Ayers.”

“Bill Ayers and Bernardine Dohrn weren’t holding fundraisers for Barack Obama because they thought he was a great American,” Peters concluded.

More on his last, very crucial comments pertaining to the horse’s ass’s influence on our current president – after the video:

Why Ayers’ influence on Obama is so profoundly disturbing:

William Ayers is a communist. But don’t take my word for it. He said so himself:

And not some nicey-nice peace-and-love kind of communist. Through his group the Weather Underground, Ayers was planning to “seize power” in a violent communist takeover of the United States:

The quotes above were scanned directly from a now long-forgotten book entitled Prairie Fire: The Politics of Revolutionary Anti-Imperialism, which was written and published in 1974 by William Ayers, Bernardine Dohrn and other members of the Weather Underground. In this slim volume, which functioned as the Weather Underground’s ideological manifesto, Ayers declares himself to be a communist, and announces that his group’s bombing campaign was intended to start a violent revolution to overthrow the American government.

Coincidentally, according to former Marxist schoolmate Dr. John Drew, Obama had the same goals while he was attending college at Occidental! And now he’s our President, and his commie pal is being lauded by our nation’s educators.

For the record, and just to be complete, here are links documenting some of Obama’s many connections to William Ayers:

• Ayers and Obama worked together for years on a school reform program called the Chicago Annenberg Challenge.
• Ayers and Obama also served together on the board of the Woods Fund of Chicago, a separate charity organization.
• Obama had his political coming-out party in William Ayers’ home.
• Ayers mentions Obama by name in a book he wrote in 1997, and mentions that the two are very close neighbors.
• Obama gave a short glowing review of that same Ayers book for the Chicago Tribune.
• Obama and Ayers were both presenters together on a panel about juvenile justice (organized by Michelle Obama).
• Both Obama and Ayers were close friends with the same person, Rashid Kalidi.
• There are also several unverified rumors swirling around that have not been documented: That Ayers may havehelped to write part (or all) of Obama’s autobiography; that Obama and Ayers shared an office space together for three years, on the same floor of the same building in Chicago; and that Ayers and Obama may have known each other as far back as 1981.

When Bill Ayers and Bernadine Dohrn led the domestic terrorist group Weather Underground in 1969, a chance meeting led Army veteran Larry Grathwohl into joining the group. Grathwohl served as a courier, running messages between the group’s leadership (called the “Weather Bureau”) and individual cells that were to carry out attacks.

Grathwohl was also an informant for the FBI.

In an interview from the 1982 documentary No Place To Hide that recently surfaced, Grathwohl discussed what the Weathermen intended to do after overthrowing the U.S. government, including what they would do with those Americans who refused to embrace communism.

I asked, “Well what is going to happen to those people we can’t reeducate, that are diehard capitalists?” And the reply was that they’d have to be eliminated.

And when I pursued this further, they estimated they would have to eliminate 25 million people in these reeducation centers.

I want you to imagine sitting in a room with 25 people, most of which have graduate degrees, from Columbia and other well-known educational centers, and hear them figuring out the logistics for the elimination of 25 million people.

And they were dead serious.

That was Bob Owens, who interviewed Grathwohl for PJ Media 26 years later. You can read that interview, here.

Ayers’ work in the education field has not really been “apart from all that other stuff.” It’s just been a less violent means to an end – what he and Obama would call the “transformation of America.” Not that the end game won’t involve some unpleasantness.

Lefties may sneer at the fact that Americans are arming up from coast to coast in anticipation of….something. But the thing is – the truth about Obama’s past managed to slip past the media gatekeepers long ago and millions of us were chilled to the bone by what we learned.

Megyn Kelly also had on the detectives who investigated Ayers to react to her interview with Ayers:

The reason I think this country is doomed is not that people like Bill Ayers and Obama exist – it’s because the American people allowed them to have power – Bill Ayers over the educational system – Obama over all of our lives. This can’t end well.

In a 40 minute speech before the Illinois Tea Party, political researcher, Trevor Loudon reviewed the radical Marxist influences that have always been present throughout  Obama’s life, resulting in a US regime that is more sympathetic to our enemies than our longtime allies.

He ended his speech on a hopeful note – crediting the tea party for preventing Obama from implementing his full Marxist agenda  in 2009/2010, and hopefully again this November.

As a companion to this, see Glenn Beck Collects Obama’s Most Outrageous Statements.

The media should serve as an amplifier, so that if politicians reveal themselves to be totally unsuitable to hold positions of responsibility, it will reach the ears of all reasonably informed citizens. Fortunately for Obama, instead of a responsible media we have an obsequious propaganda corps, the purpose of which is to keep him in power. We wouldn’t be faced with the potential catastrophe of the Moonbat Messiah’s reelection if the media didn’t sweep his most outrageous statements under the rug: 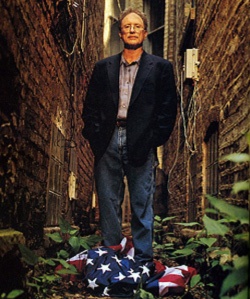 Breitbart TV has released yet another damaging video that shows one of Obama’s radical buddies talking about “white supremacy”. Video here.

In answer to an interviewer’s question about the white racist power structure, Ayers, replied:

“I mean, I think the people who practice white supremacy and who benefit from it are going to have to be stopped. And I think that’s a huge undertaking and I think it takes a revolution.”

It sorta fits in with the Derrick Bell, Louis Farrakhan, Jeremiah Wright Marxist CRT world view that some would argue our current President shares.

But wait – “Bill Ayers was just someone from Obama’s neighborhood, with whom he occasionally crossed paths, and who did despicable things when Obama was only eight years old. Why does it matter what Bill Ayers says. That’s just guilt by association!”, the Media Matters/Fight the Smears/Attack Watch argument goes.

Because the American people would rightly reject a Presidential candidate who was close family friends with an unrepentant domestic terrorist, and “small c communist”.

When was Obama ever “family friends” with the unrepentant terrorist?

Who ever said that?

How about …the unrepentant terrorist, himself, shortly after the 2008 election, as the Chicago Tribune reported:

In a new afterword to his 2001 book, Bill Ayers, former leader of the 1960s radical group Weather Underground, describes President-elect Barack Obama as a “family friend” and denies he wished his group had set off more bombs in the 1960s.

Ayers, a professor at the University of Illinois at Chicago, adds few new details about his relationship with Obama in the afterword to Fugitive Days: Memoirs of an Anti-War Activist. The book is being reissued this month.

“We had served together on the board of a foundation, knew one another as neighbors and family friends

But right-wing commentators tried to use those connections to smear Obama, he says.

Within 24 hours, Ayers was furiously back-peddling, adjusting his story to something more in line with what the Obama camp had been saying all year:

“I’m talking there about the fact that I became an issue unwittingly and unwillingly in the campaign and I decided that I didn’t want to answer any of it at that moment because it was such a profoundly dishonest narrative, but…I’m describing there, uh, how the blogosphere characterized the relationship. I would say…uh…really that we knew each other in a professional way, uh, again, on the same level as thousands of other people … uh, and I am a guy from around the neighborhood, incidentally.”

It must have been very painful for Ayers to have to disavow their friendship because he couldn’t resist that little jab at Obama, there – uh, and I am a guy from around the neighborhood, incidentally.”  Which is exactly how his craven former friend had described their acquaintance to inquiring reporters.

I think we can all admit it, now, right?  Bill and Bernardine were close enough to the Obamas that they were trusted to babysit the Obama girls.

After all, they hold the same poisonous, Marxist, revolutionary, CRT world view.

A  blast from the past that has disturbing foreign policy implications we see panning out, today: Obama’s Stealth Socialism.