If this doesn’t get your foot to tappin’, there’s something wrong with your foot: 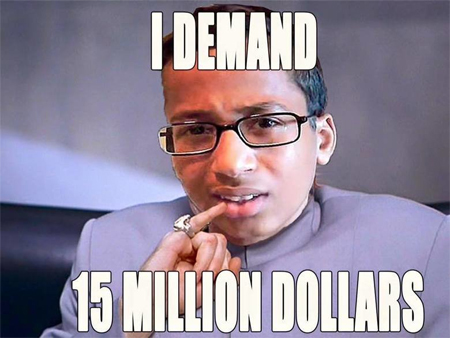 The family of Ahmed Mohamed (aka “Clock-Boy”) the high school freshman who made international headlines after being arrested for bringing a suspicious looking “homemade clock” to school, filed a federal lawsuit Monday against the Irving Independent School District and the City of Irving.

“Legal counsel for Irving ISD has confirmed that the school district was named as a defendant in a lawsuit filed today in Dallas federal court by attorneys for a former Irving ISD student. As with any legal matter of this nature, attorneys for the school district will review the filing and respond as appropriate. Irving ISD continues to deny violating the student’s rights and will respond to claims in accordance with court rules. Because this matter is now in litigation, Irving ISD officials will have no further comment at this time. Irving ISD employees are focused on welcoming 35,000 students for the 2016-2017 academic year and doing everything possible to ensure each student is achieving his or her maximum potential.”

The lawsuit claims the Ahmed”s civil rights were violated after school officials mistook his clock for a bomb and that his  “wrongful interrogation” was due to his race.

The family is seeking $15 million in damages and an apology from district officials.

The city of Irving said it welcomed the opportunity to let all the facts to be revealed in a statement Monday.

“The city of Irving is prepared to vigorously defend itself and the justifiable actions it took in this matter. The legal process will allow all facts to be revealed, and the city welcomes that opportunity. The city of Irving’s top priority is to ensure the safety and security of its children and the entire community. The city will continue to take its duty and responsibility to serve and protect the public seriously.”

There are reasons the city of Irving is looking forward to being able to tell their side of the story in court.

For one thing, it’s not true that school officials “mistook his clock for a bomb.”  They mistook it for a “hoax bomb.” There’s a difference.  The contraption — which took a minimal amount of effort and about half a minute to assemble– appeared to school officials and police to have been specifically designed to look like a briefcase bomb and cause alarm.

An electronics enthusiast on YouTube last year demonstrated how much effort went into Mohamed’s “invention.”

Last September during an interview with Glenn Beck, Irving Texas Mayor Beth Van Duyne revealed that the family of Ahmed Mohammed not only repeatedly refused to meet with city officials but refused to sign a school release form that would have explained the school and police’s side of the story.

Instead, the family held a press conference in their front yard flanked by CAIR lawyers, basking in the media attention. The president complimented the fourteen year old “wiz kid” on Twitter and invited him to the White House. The young hoaxter was feted by celebrities, given lavish gifts by big corporations,  and went on a world tour in October that included a chummy visit with the evil, genocidal, war criminal President Omar al-Bashir of Sudan. Clock-Boy was able to meet with Obama later that month at the White House Astronomy Night. While he was in Washington DC, Ahmed’s father, Mohamed Elhassan Mohamed, called for a new amendment to the US Constitution, presumably to end the kind of cruel ethic profiling his son had suffered.

Here, Clock-Boy recounts to the sympathetic media all the damages he’s suffered due to the school’s actions.

Last October Mayor Van Duyne said she was “shocked” when she saw the president’s tweet to Ahmed Mohammed, complimenting him on his “cool clock.”

She said “it seems to be an underlying habit that he is going to second guess police officers without any kind of information.”

She later noted that the president had tweeted about the case and invited Ahmed to the White House before the pictures of the clock were even publicly available. Obama made no attempt to contact her office before making public comments in support of the Muslim teen.

The mayor also said: “I now have our police chief who is a wonderful, wonderful man, a family man, a churchgoing man, and I now have our police officers as well as a number of teachers, school administrators, receiving death threats as a direct result of this. It is unfortunate, and it has got to stop.”

“As a juvenile, they can not release those records. The school district, a number of times, has asked the family, to release the records, so that you can have the balanced story out there. The family is ignoring the request from the ISD.”

Van Duyne told Beck that if the records were available it would “help to describe why it progressed as it did.”

Well, the records should now be available in court– and they’re going to tell an interesting backstory about this family. Sometimes “discovery” can be a bitch.