Another “supercut” courtesy of our friends at the Washington Free Beacon.

Give MSNBC credit: The network’s higher-ups realized the channel was in drastic need of a change in 2015.

Five shows were canceled. Daytime programming was dramatically altered to focus on hard news instead of light-weight liberal commentary.

But true to its ultra-progressive nature, MSNBC still had another bizarre year, from Melissa Harris-Perry decrying the term “hard worker” because it demeaned slaves to a panelist suggesting Bobby Jindal was trying to appease conservatives and “scrub the brown off his skin.”

Chris Matthews always gets a little grumpy when he’s reminded about  his “thrill up my leg” comment. (See here, here, here and perhaps most famously here.) But “Tingles” got downright surly when MRC TV’s Dan Joseph accosted him in Las Vegas about his notorious leg thrill after the CNN GOP debate.

Dan wanted to know if he was still feeling the thrill or whether the thrill was gone after seven years of Obama.

Matthews didn’t see the humor in Joseph’s line of questioning. At all.

“Go to hell!” he barked when Joseph asked how his leg is doing….

Joe Klein on Morning Joe this morning said the Obama administration is “slow-walking aid to the al-Sisi government.”

The reason why the Regime is stiffing our ally in the fight against ISIS, Klein explained, is because the  al Sisi government came to power by overthrowing the Obama favored Muslim Brotherhood.

“I think it comes from the NSC – which is pretty weak – and also there are a group of people both at the State Dept and the NSC who are – um – who are…*humanitarians and human rights advocates,” Klein explained.

“Why wouldn’t they be the most mad?” Nicolle Wallace interjected.

An appalled Scarborough said, “so are you telling me that we have Egypt bombing ISIS, fighting ISIS, going to the UN against ISIS… fighting Hamas, and we’re not supporting them because we don’t like how he got in power?”

Now that Lyin’ Brian Williams has been thrown under the bus by NBC News for lying to its viewers, the Smoking Gun is asking why the lying “Rev. Al” is still clinging to the bumper.

Now that the media conglomerate has delineated that bright line, when does the Rev. Al Sharpton’s suspension without pay begin?

In the wake of last year’s lengthy TSG report about Sharpton’s secret work as a paid FBI Mafia informant, the MSNBC host sought to blunt the story’s disclosures with a series of lies told at a pair of press conferences, on his nightly “Politics Nation” program, and in a report on Williams’s own NBC Nightly News (which was rebroadcast on NBC’s Today show).

Sharpton, 60, cast himself as a victim who first ran into the FBI’s warm embrace when a scary gangster purportedly threatened his life. He was “an American citizen with every right to call law enforcement” for protection, Sharpton told his MSNBC audience. His sole motivation was to “try to protect myself and others.”

He needed the FBI’s help, Sharpton claimed, because his relentless advocacy on behalf of African-American concert promoters had angered wiseguys with hooks in the music business. “I did the right thing working with the authorities,” Sharpton assured viewers. As for being branded an informant, that was a label for others to worry about. “I didn’t consider myself, quote, an informant. Wasn’t told I was that,” said Sharpton.

These claims, broadcast by NBC Universal, were demonstrably false. 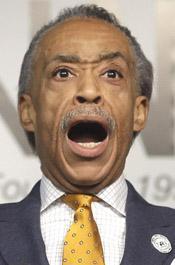 Read on here for the whole sordid story.

Meanwhile, Fox News’ Greta Van Susteren has been wondering why tax cheat Sharpton gets a free pass from the IRS.

Why should Reverend Al Sharpton getting a pass from the IRS and the White House? (and the NYC Mayor!)

1. Why hasn’t the IRS garnished Reverend Al Sharpton’s MS/NBC pay for all his back taxes? Reports are that he owes more than 4 million dollars in back state and federal taxes.

2. And why does the Obama Administration continue to invite him to the White House for his advice while he has outstanding this reported (New York Times) tax debt? Why not make him pay up, and then invite him?

I have read article after article that Reverend Al Sharpton owes lots and lots of back taxes — that means he owes you. And, to the extent he is not paying his taxes, you are picking up the tab.

And until he gets current in his debt to the taxpayer, he should not have “most favored nation” status with President Obama and the White House.

There is just a tiny conflict of interest, there. It’s nice that there are at least SOME members of the media willing to point these things out.

So, during a recent interview on her MSNBC show,  Melissa Harris Perry asked outgoing Attorney General to “quack like a duck.”

Did you hear about this? I’m guessing no, unless you happened to catch Megyn Kelly and Howard Kurtz laughing about it on Fox.

And you really have to see it to believe it.

Toward the end of the interview, the obsequious Perry told Holder, “you know we call you ‘The Duck’ in our land…You have a placid and even way of presenting, but you are just working for justice underneath.”

She asked plaintively, “would you quack for us?”

“That was the most cringe inducing thing I’ve seen since Glosell Green was in the bathtub with Fruitloops before interviewing the president!!!” Kurtz laughed as he unshielded his eyes. “I thought she was going to get down on one knee and proclaim her undying love for Eric Holder!”

Megyn then did a perfect impersonation of Melissa Harris Perry saying; “Would you quack for us..” eliciting guffaws from Kurtz. “I’ve never seen anything like that. What was she doing?!”

“How humiliating for her, “Kelly added. “Does she know how much she humiliated herself?”

On a more serious note.

The DOJ continues to be horribly corrupt and ridiculous under Holder.

The angry attorney then proceeded to take his rage out on a Daily Caller News Foundation reporter, but more on that later.

The recipient of the tongue lashing? Deputy Assistant Attorney General Kenneth Blanco. During questioning from House Judiciary Chairman Bob Goodlatte, Blanco admitted that he had not even read the Inspector General report that was a key part of the subcommittee’s meeting.

Six years in, members of this Regime don’t even pretend to give a shit. They are dug in, and will do whatever the hell they please. These oversight hearings are a pesky inconvenience they don’t even bother to prepare for.

I saw this on Twitter and thought it was a joke. It was not a joke.

The sniveling cowards at PMSNBC actually blurred the cover of an issue of Charlie Hebdo during an interview with a contributor to the magazine, Tuesday.

The move was made all the more pathetic as Caroline Fourest, the Charlie Hebdo contributor, accurately predicted that the network would blur the cover, a decision which she said was “just crazy.”

“Then we had some other cartoons, more Charlie Hebdo, like this one, that I know because we are in America, you are probably going to blur it, which is just crazy,” Fourest told MSNBC’s Ronan Farrow.

Via The Daily Caller:

The French journalist then held up a copy of a Charlie Hebdo issue, the cover of which depicted a cartoon of Muhammad which MSNBC had blurred, as Fourest predicted.

“So let’s talk about that,” Farrow simpered. “It’s a debate going on in newsrooms around the world, and it is true, many stations including NBC News have decided they will not show some of those covers that are most offensive, particularly in their depictions of the Prophet Muhammad. What’s your response to that?”

“I think it is the saddest news I’ve heard in this all of this incredibly moving mobilization around Charlie Hebdo,” Fourest replied.

I don’t know what is more annoying about Farrow’s pathetic mewling.

The idea that MSNBC is not showing the cartoons out of politeness (not out of political correctness and mortal fear,) when everyone knows that they’ve not shown themselves to be so polite when it comes to offending other (conservative) groups.

Or Farrow’s idiotic insistence on calling the original head-chopper, “the Prophet Mohammed.”

Is Farrow a Muslim convert? If not – why does he call him, “the Prophet?”

Good grief man. I can sort of understand the reluctance to show the cartoons under the threat of murder and mayhem – but I don’t think the “violent extremists” are going to come after you for the offense of not showing enough groveling deference to their prophet.