He prevailed in court this morning, only to have be targeted with the vicious left-wing intimidation tactic of SWATting, this evening.

Aaron Walker, one of the bloggers targeted by Brett Kimberlin, is the latest victim of SWAT-ting. Walker, who goes by Aaron Worthing online, tweeted the news of this extreme form of harassment being used on his family shortly after news broke that the peace order against him had been modified, restoring his First Amendment rights. Thankfully, though, Aaron reports that he and his wife are safe.

Obviously, whoever is behind this, is desperate and not thinking clearly. Within moments of Worthing/Walker’s tweet, the story went viral on Twitter. All the SWATing did was draw more unwanted attention to the Kimberlin criminal cabal.

The officers had machine guns but did not point them at Aaron. They were quickly able to determine it was a hoax.

Readers will excuse the intensity of my reaction, but I simply cannot imagine that any criminal would be so stupidly overconfident to attempt such a thing, at a time when there is so much public attention on the subject. It boggles the mind.

Check out Walker’s blog, Allergic to Bull, later tonight for an update about the incident.

After conservative blogger, Michelle Malkin, wrote a tweet gently mocking Alec Baldwin , for the spate of unhinged tweets he wrote about the  execution of Troy Davis, Wednesday night, he fired off a series of tweets calling on his followers to attack her:

As a man of the left, Baldwin would have known that a barrage of vile, left-wing sputum would soon follow. Immediately, Malkin was under unrelenting, vicious attack by Baldwin’s rabid followers.

Screenshots via The Right Scoop:

A “Christian” follows these tweets with:

Even more vile  screenshots below the fold:

END_OF_DOCUMENT_TOKEN_TO_BE_REPLACED

Sergeant Schultz was giddy because when Union boss James Hoffa said he wanted to take out those sons of bitches in the tea party, he was “spot on!”

Schultz proceeded to make some truly absurd remarks about how there was nothing wrong with what Hoffa said because of things previously uttered by conservatives such as former Alaska governor Sarah Palin and Republican presidential candidate Michele Bachmann.

I guess he forgot about all the calls for civility in political discourse – including from himself! – following the tragic January shootings in Tucson.

Missing his own hypocrisy, Schultz actually told his viewers that President Obama’s poll numbers are down “because liberals in many parts of the country are very frustrated that nobody in the White House is talking like James Hoffa.”

Yeah, he really said that.

You can’t make this stuff up.

Schultz brought Hoffa on via satellite to ask the burning question, “Do you think the Republicans are sons of b—hes?”

Hoffa responded, “Well, I think they are if they’re trying to take away food out of the mouth of working people.”

Well yes, that’s the thinking man’s answer. Of course middle class tea partiers (who work for a living, too) “want to take food away from the mouths of working people.” That makes perfect sense.
–
After listing off a litany of tea party offenses from wanting to take away public union “collective bargaining rights” (guilty!) to “basically (wanting to)take away their pensions” (make modest cuts), he declares, “that’s a BAD person!”
–
You can count me among the legions BAD persons and SOBs out there who aren’t down with the Obama/big labor/CPUSA agenda.

Kevin Jackson,  author of the book The Big Black Lie and Sexy Brilliance, was on Fox News with Megyn Kelly, Thursday to discuss the recent barrage of ugly, racially charged rhetoric we’ve been hearing from the left in recent weeks. His answer to Maxine Waters, specifically: “Hell is in the black communities that the Congressional Black Caucus serves.”

You want to know why the inner cities have become crime-ridden cesspools, look in the mirror, lady. Stop blaming people who had nothing to do with it.

Your rant of the day is courtesy of Townhall:

I had the pleasure of meeting Kevin Jackson in person when he recently visited the small town of Adrian, MO for a Liberty Loyalists event.

If you liked the above video, you might enjoy this one, too: 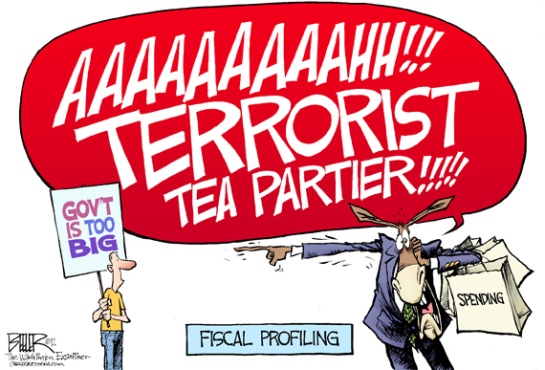 Ace frames this Rassmussen report as “The New Tone Sinks In…”:

Disagreeing? 55%. Which is a majority but not much of one.

I usually ignore polls because they almost always depress me, but this actually looks like positive news, for once. 29% is left-wing moonbat territory. If this is the best the liberal mob can do after their latest round of vicious attacks on the tea party, they should cease and desist because their heavy-handed and over the top political agitprop will end up back-firing. The majority ain’t buying.

Just 34% of all voters in separate polling favored tax hikes as part of the deal to raise the debt ceiling. Fifty-five percent (55%) opposed including tax increases of any kind in the deal.

Sanctimonious liberals love to blast conservatives for their “vitriolic discourse”, yet often fail spectacularly to maintain basic civility in their own discourse. The New Tone Award is reserved for left-wing notables who wallow in this hypocrisy. The list, this week, is smaller than usual because most libs have been too busy gushing about Obama’s “gutsy call” to go after conservatives with their usual vigor. Chris Matthews, most notably, has been able to balance his leg-tingling enthusiasm for the president with vicious Republican-bashing rhetoric.

New Tone Nominees For Week Of May 1-6

Dem Congressman: This Is “Mission Accomplished Moment” Bush “Fantasized” About…

Condescending Harry Reid: Marco Rubio ‘Has to Understand Who He Is and Who He Represents’

Sen. Harry Reid (D-NV) speaking to a Latino internet news service launches into a condescending reproach to his fellow senator from Florida. The ethnic implication of Reid’s remarks bring to mind his statement from the 2010 election when he declared “I don’t know how anyone of Hispanic heritage could be a Republican.”

But Iraq — all the death in Iraq was not caused by bin Laden. The death in Iraq was caused by George W. Bush. Five thousand Americans, tens of thousands permanently damaged and shot to pieces, a million Iraqis dead — that wasn’t bin Laden. That was George Bush. So when does Seal Unit 6, or whatever it’s called, drop in on George Bush? Bush was responsible for a lot more death, innocent death, than bin Laden. Wasn’t he, or am I wrong here?

During testimony before the House Education and the Workforce Committee, she said seniors “will run out of money very quickly.”

She continued, “If you run out of the government voucher and then you run out of your own money, you’re left to scrape together charity care, go without care, die sooner. There really aren’t a lot of options.”

On Thursday’s Hardball, hours before the first GOP face-off, the cable anchor dreamed up hypothetical queries he would like to see: “Question to Mr. Candidate, do you believe in evolution? Are you a fundamentalist who believes in the Bible as written? Has man been around millions of years or, say, just about 6000?“

MSNBC’s Chris Matthews on Wednesday mocked Rush Limbaugh’s response to the killing of Osama bin Laden, deriding the conservative as a “walrus underwater.” Matthews also made an odd grunting noise to back up this description.

Former Newsweek editor Howard Fineman contrasted the Bush/Cheney administration’s dropping of bombs in Iraq with Obama’s actions. Matthews responded by mocking, “There’s a difference between being cold blooded- I think presidents have to be cold blooded- and being a sadist.”

As if his point wasn’t clear, the liberal anchor interrupted Fineman to add, ” I was referring to Cheney, of course.”

As always, you can make up to 3 selections, but you may only vote once, at Left-Wing Institute For Civil Discourse.