Yesterday I was wondering why  Republicans continue to allow this Scandal Plagued President to get away with so much corrupt, unethical, destructive, vindictive, dishonest and in some cases criminal malfeasance. (See Doug Ross for Obama’s Complete List of Historic Firsts for the gory details.)

Looks like some United States Citizens are taking matters into their own hands: 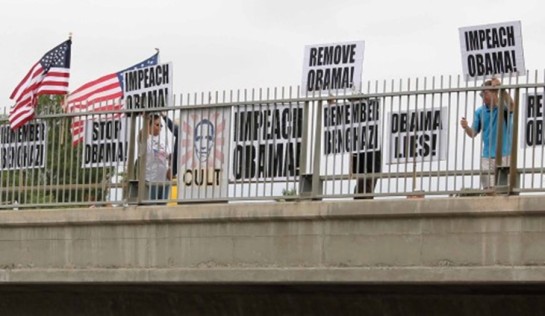 A new activist group is attempting to launch summertime demonstrations across the country demanding that Congress act to impeach the president. The protests will feature groups of anti-Obama activists hanging banners across overpasses above the busiest highways they can find.

The newly formed Overpasses for Obama’s Impeachment – inspired by a June 8 Tea Party protest that snarled traffic in Carlsbad, California – plans to begin protests July 4, according to a report by Examiner.com. Organizers hope to organize wave of protests across the nation, dubbed “The Patriot Wave,” in the hope that it will catch the attention of Congress.

Here’s the Facebook page. There are 2,795 likes so far and there are local chapters in all 50 states.

9 thoughts on “Overpasses For Obama’s Impeachment Launches On Facebook”