I didn’t go. Why didn’t somebody remind me? There’s a movement afoot, and I want to be a part of it. Ughh! I would have loved to have been there.

KSHB Action News says there were about 100 protesters. I heard from someone who was there, that one of the organizers announced a crowd of 750 at the peak, at about 10:30. It looks like a whole lot more than 100.
Rantings and Ravings was there and posted pictures. Here are a couple:

Looks like they had a decent showing. Next time somebody had better remind me, dangit.

More pictures from John,  an Ace Of Spades moron who was there:

Someone is quite the artiste:

Love this: “Get your paws off the economy, you damn, dirty, Dems”!

I see there was a Michael Savage fan in the crowd:

John says another protest  is planned for next Saturday, starting at J.C. Nichols Fountain on the Plaza at 10:00 a.m., then marching on to Senator McCaskill’s office.

STILL MORE at Katablog, who has a slideshow.

I’m not a good crowd estimator but I’d guess there where between 200 and 300 500 to 750 people who turned out in 25 degree weather to make their voices heard. In addition we had a lot of passing traffic who provided their support with thumbs up and honking.

She’s right. There were way more than 100 people at this thing: 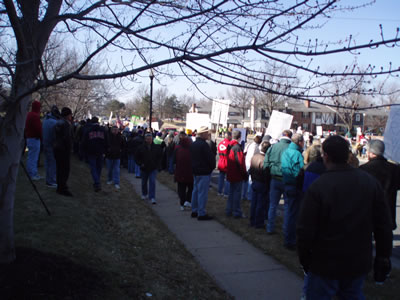 How about it Obama? Kid wants a tiger. What could go wrong?

Senator DeMint is encouraging street demonstrations to save our country:

And he thinks we may have to take to the streets to save it.

“I would think it’s time to start thinking about peaceful demonstrations,” he told us last week.

“The power of the people is there. Freedom is in the people’s hands right now, and it’s about to slip through.”

He also calls Obama a radical Communist. I happen to agree.

See Confederate Yankee for the 11 most expensive catastrophes in history. You’ll never guess #1.

Does the Frankfurt School ring a bell? I remember learning about it at some point in the distant past, but had largely forgotten about it until I watched this video at Pat Dollard’s. It explains how the school was the spawning ground for the cultural Marxism that is so pervasive, today. It’s over 20 minutes long, but well worth your time because it helps to understand how we got to where we currently are, because the more we understand it, the better we can fight it:

See also this essay on The History Of Political Correctness at Pat Dollard’s.