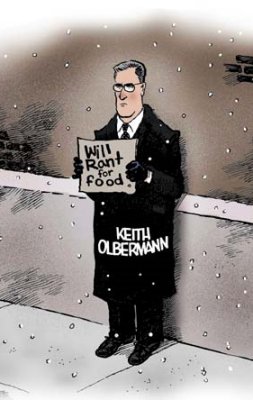 If you were wondering what Olby’s  been up to now that he has so much time on his hands, Newsbusters is there for you: Olbermann Bashes Vietnam Vet’s Letter to the Editor About Him:

The object of Olbermann’s disaffection was one Ed Driscoll who was quite pleased by the former “Countdown” host’s departure from MSNBC:

I participated in more than 10 combat missions in Vietnam, so I know a mission is not a war. Someone should have told that to Olbermann, as he demonstrated his ignorance by equating the two for years on his show.

In Bush’s speech, he said that much work has yet to be done. The sign was for the brave people who had completed their mission.

Olbermann can take the money and run. I don’t care where.

Mr. Driscoll’s letter was short and to the point. And it very effectively eviscerated one of the left’s favorite talking points about George W. Bush. Why a megalomaniac like Olbermann would want to draw attention to it on Twitter is anyone’s guess, but it was retweeted over a 100 times by his brain-dead followers so I guess he knows his fans well.

Linked By Michelle Malkin in Buzzworthy, and Doug Ross, and Weasel Zippers, thanks!