Now I know we have officially entered the “Silly Season”: 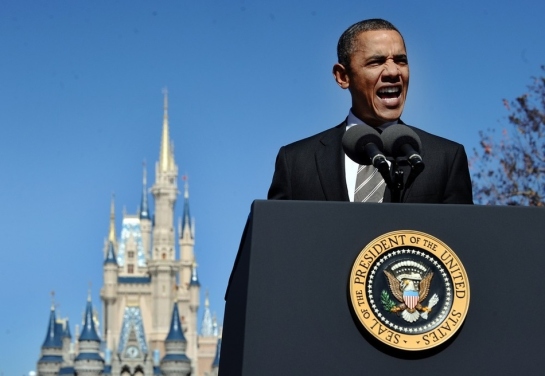 Photo via Buzzfeed: 13 Photos Of Barack Obama At Disney That Will Probably Turn Up In Attack Ads

Alexa Shrugged: The Obama Presidency In One Picture

Where did President Obama go after killing off thousands of Keystone XL pipeline construction and manufacturing jobs? Why, Disney World, of course. Sabotaging work is hard work for Goofy and his pals.

And where’d he head after that? Why, up to Manhattan for more high-priced campaign fundraisers charging up to $38,500 per partier. The business of wining and dining politically connected donors ain’t child’s play, you know.

Obama touted a White House foreign tourism initiative on Thursday with Cinderella’s castle as his backdrop. “America is open for business,” he proclaimed chirpily to the rest of the globe.

Tell that to the Keystone managers in Canada whom Obama and his State Department rebuffed — after years of planning and review — in order to appease militant environmentalists and Hollywood celebs. The Animatronic Divider robotically lambasted Republicans for pushing him to make a decision this week. But Senate and House Democrats issued the sharpest rebukes to White House obstructionism:

WHO WON THE DEBATE? DICK MORRIS TV: LUNCH ALERT! Not who you think. And not particularly good news for the Not Romney vote.

One day out from the primary, South Carolina is a two man race beween Mitt Romney and Newt Gingrich. The latest Rasmussen Reports poll has Gingrich up by 2, the latest Insider Advantage poll has Newt up by 3, and PPP, on its first of three nights of polling on 1/18, had Newt up by 6.

No one will aver accuse me of being a Chuck Todd fan, but let’s give the man credit where it’s due. Though he’s careful with his language, Todd not only sees through what Colbert’s doing, he’s also troubled that much of the MSM is complicit in furthering the Stewart/Colbert left-wing agenda:

Horrifying>>>Family Security Matters: VIDEO: Saudi Journalist: Religious Police Made 15 School Girls Burn to Death Because They Were Not Wearing Hijabs

AWR Hawkins, Big Government: BREAKING on Fast and Furious: Cunningham Agrees to Appear Before Issa’s Committee, but Refuses to Testify:

The subpoena demanded Cunningham testify before the committee on January 24, 2012. And yesterday, Cunningham’s attorney, Tobin J. Romero, made it known that although his client will show up as demanded, he will not be providing any information to Issa and the rest of the committee.

Here’s an excerpt from Romero’s letter:

Keep reading… Hawkins now speculating  Cunningham is “being set up as a scapegoat for others who are much higher up the food chain in the Fast and Furious saga”.

RedState: Smith and Reid give in, setting aside SOPA and PROTECT IP:

According to Darrell Issa, SOPA is officially postponed by House Judiciary Chairman Lamar Smith. Issa broke the news on Twitter, which only underscores how important it is that we protect the Internet from capricious censorship, as was the risk under a SOPA-like regime.

Couldn’t help myself. The above photo reminded me of the unhinged Obama photos from the 2010 campaign trail:

Liberals are crowing about what they see as a huge victory for them — and they are right — because this victory comes at the expense of religious liberty.

Welcome to the Obama 2012 reelection plan: ignore and marginalize people of faith, pander to the far-left’s sexual-political priorities.

President Obama’s rejection of the Keystone XL pipeline from Canada to the Gulf of Mexico is an act of national insanity. It isn’t often that a president makes a decision that has no redeeming virtues and — beyond the symbolism — won’t even advance the goals of the groups that demanded it. All it tells us is that Obama is so obsessed with his reelection that, through some sort of political calculus, he believes that placating his environmental supporters will improve his chances.

AoSHQ: News No One Noticed: Obama Forbids Uranium Mining on Federal Lands In Arizona for Next 20 Years:  He was going to lose AZ, anyway.