If you were like me, you were wondering who that mysterious smirking dude in the background of all of the Obama/Chavez love fest pictures was.

This is quite a piece of news, of the astounding sort. For me, the shock is the incredible realization that Nicolas Maduro, a general failure in life has managed to reach two of the highest offices in the country strictly on his servility merits to El Supremo, a.k.a. Hugo Chavez. But also, as a strange relief of sorts, we are left to admire how a totalitarian regime sets itself in place.

There is really nothing positive to write about him. He is a failed union leader, from the Caracas subway system if memory serves me well. He never did anything smart in his life, and since the press got him as a source of news in 1998, there is nothing I can point that he did that showed creativity, originality or even hard work. He gained weight and got known for his escapades to visit his guru in India, first class ticket of course, at tax payer expense one may presume sinc ehe never bothered showing the receipts and even for an assemblyman paycheck, first class tickets to India is quite a bundle.

The third thing Maduro did was to organize the “civilian” group within chavismo. In this meaning, “civilian group” meant organizing non military folks that were willing to be as devoted to Chavez, no questions asked, as the military that Chavez so obviously favored. Which admittedly was not much hard work either as all were only too willing to imitate Maduro.

Is this “civilian group” just as powerful, just as strong,  just as well funded as their military, I wonder?

Jungle Mom has a great pictorial of Chavez meet and greets with bad guys the world over. 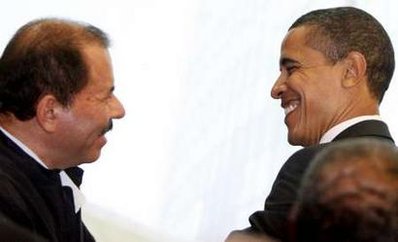 Obama claims he was only three years old when America engaged in those despicable acts.

Ortega “droned on about the offenses of the past”:

…dredging up U.S. support of the Somoza regime and the “illegal” war against the Sandinista regime he once led by U.S.-backed Contra rebels in the 1980s. Ortega was a member of the revolutionary junta that drove Anastasio Somoza from power in 1979 and was elected president in 1985. He was defeated in 1990 by Violeta Chamorro and ran unsuccessfully twice for the presidency before winning in 2006.

Of the 19th and 20th centuries, Ortega said: “Nicaragua central America, we haven’t been shaken since the past century by what have been the expansionist policies, war policies, that even led us in the 1850s, 1855, 1856 to bring Central American people together. We united, with Costa Ricans, with people from Honduras, the people from Guatemala, El Salvador. We all got together, united so we could defeat the expansionist policy of the United States. And after that, after interventions that extended since 1912, all the way up to 1932 and that left, as a result the imposition of that tyranny of the Samoas. Armed, funded, defended by the American leaders.”

Ortega denounced the U.S.-backed attempt to overthrow Fidel Castro’s new Communist government in Cuba in 1961, a history of US racism and what he called suffocating U.S. economic policies in the region.

In his 17-minute address to the summit, Obama departed from his prepared remarks to mildly rebuke Ortega.

“To move forward, we cannot let ourselves be prisoners of past disagreements. I’m grateful that President Ortega did not blame me for things that happened when I was three months old. Too often, an opportunity to build a fresh partnership of the Americas has been undermined by stale debates. We’ve all heard these arguments before.”

Have we? Have we also agreed with them?

Actually, the president misspoke on the sequence of events in Cuba. The invasion of CIA-trained rebels at the Bay of Pigs in Cuba occurred in April 1961. Obama was born August 4, 1961.

Where is TOTUS when you need him????

And an Obama Doctrine emerges:

Other countries have “good ideas” , too…

Well, huh…let’s just see how that compares with the Bush Doctrine:

The security environment confronting the United States today is radically different from what we have faced before. Yet the first duty of the United States Government remains what it always has been: to protect the American people and American interests. It is an enduring American principle that this duty obligates the government to anticipate and counter threats, using all elements of national power, before the threats can do grave damage. The greater the threat, the greater is the risk of inaction – and the more compelling the case for taking anticipatory action to defend ourselves, even if uncertainty remains as to the time and place of the enemy’s attack. There are few greater threats than a terrorist attack with WMD.

To forestall or prevent such hostile acts by our adversaries, the United States will, if necessary, act preemptively in exercising our inherent right of self-defense. The United States will not resort to force in all cases to preempt emerging threats. Our preference is that nonmilitary actions succeed. And no country should ever use preemption as a pretext for aggression.

He said that first, he remains intent on telling the world that the United States is a powerful and wealthy nation that realizes it is just one country among many. Obama said he believes that other countries have “good ideas” and interests that cannot be ignored.

Second, while the United States best represents itself by living up to its universal values and ideas, Obama said it must also respect the variety of cultures and perspectives that guide both American foes and friends. 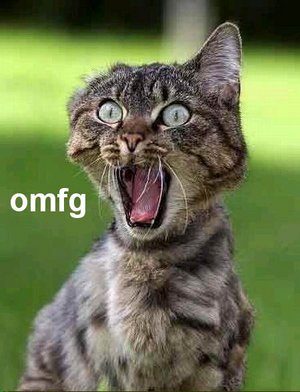 Oh, what the hell, conservatives may as well capitalize on the on the shocking ineptness of the Obama administration: