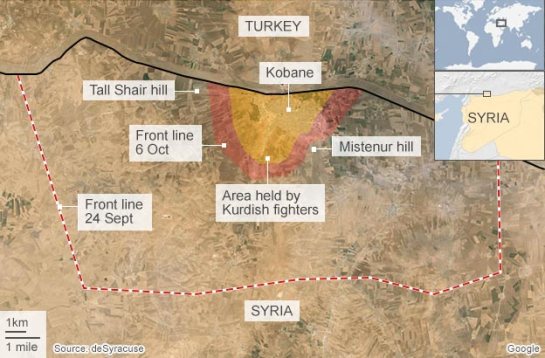 The carnage continues in Kobane, and although most civilians have made it across the border into Turkey – an estimated 700 mostly elderly civilians remain in the city’s center. Approximately 12,000 in all remain in or near Kobane and will likely be slaughtered if ISIS takes the town.

The ISIS mutants reportedly overran the Kurdish headquarters in Kobane, and attempted to advance to the center of town, but were beaten back by Kurdish fighters..

The IS assault sparked 90 minutes of heavy fighting with the town’s Kurdish defenders before the jihadists fell back, the Syrian Observatory for Human Rights said.

US-led coalition warplanes also carried out two air strikes on IS targets south and east of the town early Saturday, according to the Britain-based monitoring group, which has a wide network of sources inside Syria.

A UN envoy warned Friday that the 12,000 or so civilians still in or near Kobane “will most likely be massacred” by IS if the town falls.

Kobane was “literally surrounded” except for one narrow entry and exit point to the Turkish border, de Mistura said.

Stuart Varney on Fox asked Col. Ralph Peters the question on everyone’s minds – why didn’t US jet fighters  bomb ISIS when they were exposed in the desert as the descended upon the town.

Peters, being overly generous, said, “in his heart of hearts” Obama is a “sincere pacifist” who “doesn’t want a body count even of terrorists.”

The conversation then moves on to Chinese hackers.

Peters doesn’t say it, but I will. I think there’s more to Obama’s reticence than merely “pacifism.” That certainly didn’t stop him from initiating military misadventures  in Libya and Pakistan where his droning campaign has killed untold numbers of civilians.

I think Obama is in on Erdogan’s plan.

On September 26, he called the Turkish president from board Air Force One.

Obama once described Erdogan as one of his best friends on the world stage and until recently was in regular contact with him. But because of Erdogan’s shocking and virulently anti-Semitic position on Israel, Obama had to politically distance himself .

But with the threat posed by Islamic State militants, the on-again, off-again relationship between Obama and Erdogan is clearly on again. Turkey occupies a strategic position along Syria’s northern border, and U.S. officials hope the NATO ally could play a key role in stopping the flow of money and foreign fighters to the group also known as ISIS.

“It’s fairly straightforward: The administration is pulling every lever to encourage Turkey to do more to counter ISIS,” said Steven Cook, a Turkish expert at the Council on Foreign Relations.

According to a White House summary of Thursday’s call, Obama “praised the work Turkish authorities” and others in caring for the influx of Syrian refugees into Turkey. The two leaders talked about the threat posed by the Islamic State and agreed to “consult closely” in the future, the White House said.

Shortly thereafter, Vice President Biden met with Erdogan in person at the Peninsula Hotel in New York, where world leaders are meeting this week for the opening of the United Nations General Assembly.

“Congratulations on the election, old friend,” Biden said, smiling broadly and commending Erdogan on being elevated from prime minister. They posed for a photo op, after which they met privately.

People have been asking over and over again – why didn’t we bomb ISIS in any kind of effective manner as they advanced on the Kurdish town?

State Department spokeswomen Jen Psaki admitted a few days ago that she has been fielding these questions day after day. And she has no coherent answer to them, making it clear that the military strategy doesn’t include protecting Kurds from being slaughtered.

Via John Hayward of Human Events, a Kurdish reporter asked, “over the past 24 hours, we’ve seen only one strike, according to the Central Command, around Kobani. I don’t really understand why there hasn’t been more attacks while large numbers of ISIS fighters are closing in on Kobani. And according to CNN and some other American media reports, they have raised the American flag – the – sorry, Islamic flag over some buildings inside Kobani. Why hasn’t been there more strikes?”

MS. PSAKI: Well, I know we have this exchange kind of every single day, which is absolutely fine, but you’re talking about one strike in the last 24 hours. That was the update, you’re right, that came from CENTCOM. There were – that strike destroyed two ISIL fighting positions south of Kobani. Other recent strikes have hit two modular oil refineries, an ISIL training camp, an ISIL-occupied building. So this is an ongoing effort.

QUESTION: They’re not around Kobani, those refineries.

MS. PSAKI: It’s an ongoing effort around – in the same part of the country. I would refer you to DOD for more about their military strategy, but obviously this is something where we’ve long said from the beginning that this would take some time. We’re working closely to do everything we can to help push back ISIL in this part of the country, but again, I don’t have any other military updates from here.

QUESTION: When I talked to – on a daily basis I talk to Kurdish people, Kurdish rebels even, Kurdish politicians on the ground in Syria. They have a different perspective. They say, well, Turkey is now trying to do America’s bid in the country when it comes to ISIS attacks on Kobani, and Turkey yesterday invited Salih Muslim, who is the leader of the Kurdish party, to reach some sort of deal with Turkish intelligence. So are you waiting for Turkey to reach a deal with the Kurdish rebels? That’s why you’re not –

MS. PSAKI: I think we haven’t – clearly we haven’t held back from our own military airstrikes in this regard. There are a range of other countries who have also participated in the last couple of days in strikes in Syria. I don’t have any other update for you.

(No, that’s not clear at all – as a spokesperson for this Regime we know nothing you say can be trusted – and the other countries are following our lead.)

QUESTION: Just one more thing, Jen. It’s clearly, like, obvious that – I mean, President Obama on the eve of 9/11 said the strategy was to degrade and ultimately destroy ISIS. We’ve seen ISIS been degraded in Iraq, but we’ve seen ISIS advancing in Syria. Can we say there are flaws in President Obama’s strategy?

MS. PSAKI: I would not say that. You’re right that the Iraqi Security Forces have certainly pushed back and they have been able to hold and even regain some areas. The efforts that have been underway in Syria have been not – have not been happening as long. I think DOD has addressed some of our strategy, so let me reiterate some of what they’ve said – that the initial round of strikes in Syria had fixed targets, such as command and control nodes, finance centers, training camps and oil refineries. Those kind of strikes will continue. Targeting in Syria is also evolving beyond fixed facilities and also includes more dynamic targeting of a tactical nature, such as vehicles, armored vehicles, convoys.

So obviously there’s certainly a strategy that’s being implemented by our Defense Department.

The ineffective strategy is being implemented by the Defense Department, but who’s directing it? Is Obama micromanaging the airstrikes in Syria?

Daniel Greenfield of  FrontPageMagazine, asks,  who is running the war? Is it the military or the usual White House mix of staffers?

Kurds had hoped that US airstrikes in Syria would save them. But as of late Tuesday, airstrikes appeared to be too little too late. Some suspect that’s partly because every target must be vetted by lawyers in Washington, a process meant to assure that strikes are legally justified but is nevertheless cumbersome in practice.

That’s from a Boston Globe editorial, not exactly a right wing paper. So how cumbersome is the approval process?

The Wall Street Journal ran a story, last month claiming that Obama would seek approval of every air strike.

The U.S. military campaign against Islamist militants in Syria is being designed to allow President Barack Obama to exert a high degree of personal control, going so far as to require that the military obtain presidential signoff for strikes in Syrian territory, officials said.

The requirements for strikes in Syria against the extremist group Islamic State will be far more stringent than those targeting it in Iraq, at least at first. U.S. officials say it is an attempt to limit the threat the U.S. could be dragged more deeply into the Syrian civil war.

Defense officials said that the strikes in Syria are more likely to look like a targeted counterterrorism campaign than a classic military campaign, in which a combatant commander picks targets within the parameters set by the commander in chief.

In Syria, officials said the administration wants to ensure that any strikes didn’t resemble the “shock-and-awe” campaign that kicked off the 2003 Iraq war and instead be kept more like the low-intensity, occasional strikes conducted in Somalia or Yemen.

I bet the residents of Kobane wouldn’t mind some “shock and awe” right now.

Via  CBS News, Defense Secretary Chuck Hagel disputed the WSJ report that President Obama would personally sign off on every airstrike against ISIS  inside Syria, saying military leaders would make those decisions.

“I was sitting next to the president yesterday when this entire issue was being discussed and he was very clear with General [Lloyd] Austin, once he makes decisions, he gives General Austin and our military leaders the authority to carry out those policies,” Hagel told members of the House Armed Services Committee Thursday, where he was testifying.

That’s an non-denial denial. Obama makes the decisions – the military carries them out.

Charles Krauthammer commented last month, “Lyndon Johnson, who had a lot more experience, was also the one who directed air strikes… and there was universal agreement that it was a catastrophe. And Obama, with zero experience, having now gone against his secretary of defense and generals on Iraq and on Syria — to a disastrous effect — is going to be in charge of the air campaign? That’s really scary stuff.”

If Obama made a deal with Erdogan to hold back on ISIS so they could slaughter his Kurdish rivals and allow Turkey to create a buffer zone – that is very scary stuff indeed.

Obama’s no-boots-on-the-ground pledge is keeping America from fighting an effective air campaign in Iraq and Syria.
Within the U.S. Air Force, there’s mounting frustration that the air campaign against ISIS in Syria and Iraq is moving far more slowly than expected. Instead of a fast-moving operation with hundreds of sorties flown in a single day—the kind favored by many in the air service—American warplanes are hitting small numbers of targets after a painstaking and cumbersome process.

The single biggest problem, current and former Air Force officers say, is the so-called kill-chain of properly identifying and making sure the right target is being attacked. At the moment, that process is very complicated and painfully slow.

“The kill-chain is very convoluted,” one combat-experienced Air Force A-10 Warthog pilot told The Daily Beast. “Nobody really has the control in the tactical environment.”

A secret decision apparently has been made by the United States, Saudi Arabia, Turkey and even Iran to let the strategic Syrian Kurdish town of Kobani on the Turkish-Syrian border fall to ISIS fighters, jeopardizing the lives of some 160,000 Syrian Kurds, WND has been told by a well-placed Middle East expert.

In letting Kobani fall to ISIS, the source said, there was agreement “to deal with ISIS later.”

The apparent decision aims to diminish the influence of the Kurds in Syria and weaken the prospect of creating a sovereign Kurdistan, which is sought by the Kurds not only in Syria, but in Turkey, Iran and Iraq..

“It is a real set up behind the backs of everyone,” the well-placed source told WND.