It didn’t take long for bloggers to get their hands on ObamaCare , , , some random guy named Jonathan Gruber’s comic book explaining ObamaCare, (written in simple language so ordinary, stupid Americans can understand it.)

Charles C. Johnson has a good write-up at Got News.

In 2012 Jonathan Gruber designed and published a propagandistic comic book to sell Obamacare to the stupid American voters, Gotnews.com has learned.

While Gruber has said that the stupidity of the American voter was a political asset in passing Obamacare, Gruber nonetheless worked with left-wing groups to explain how the law worked.

Get a load of this:

Peter Suderman of Reason was one of the few bloggers who wrote about the book back in 2012, when it was released.

Health care is a giant fat person crushing Congress. Or at least that’s the picture readers get—quite literally—from reading Jonathan Gruber’s Health Care Reform: What It Is, Why It’s Necessary, How It Works, a desperate attempt to make the case for Obama­Care in graphic novel form.

Gruber, an economist at the Massachusetts Institute of Technology, served as a chief architect of Mitt Romney’s Massachusetts health care reform, which provided the model for the 2010 Patient Protection and Affordable Care Act (PPACA). He then worked as a paid consultant for the widely unpopular federal law. Gruber plays a central role in his own book, appearing as a nerdy-looking cartoon character who guides readers through an illustrated version of federal health policy basics with exciting lines like “the best and most comprehensive parts of the ACA are yet to come.”

Why deploy cartoon Gruber to battle cartoon villains such as a mummy who warns that Obama­Care won’t cover the uninsured and a lagoon creature who tries to scare people into thinking the law will cause insurance premiums to rise? Perhaps because at this point the law’s defenders are desperate enough to try anything to make it more popular. This is a far cry from the run-up to PPACA’s passage, when Democratic strategists convinced themselves that sagging public support would be turned around once people finally understood the law’s benefits.

Note that Gruber was still peddling the 2013 lie of the year to gullible Americans in his 2012 comic book: 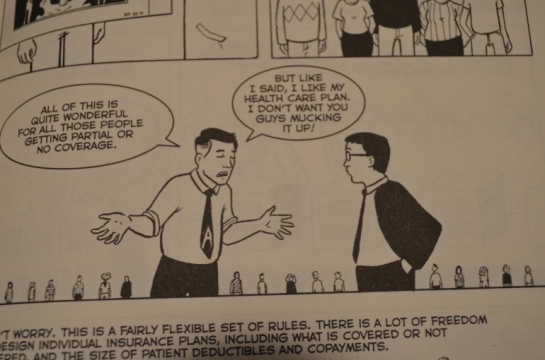 Gruber collaborated with the Obama-centric Center for American Progress to produce this video using his work and comic books to sell Obamacare.

There’s much more at Got News.

There was a time in which King Obama at least PRETENDED he cared about the Constitution – first when George Bush was in office – of course. No video montage of Obama would be complete with out at least one example of gross hypocrisy. But even throughout the first few years of his presidency Bam insisted he was constrained by the Constitution from doing what he needed to do (to help the American people.)

This week, Obama unilaterally decided to tell insurance companies that they could now allow sale of plans in the individual insurance market that Obamacare had prevented, forcing five million Americans off the health plans they liked. As Ken Klukowski ofBreitbart News has written, this is a violation of the Constitutional separation of powers:

Obama’s announcement is a flagrant and undeniable violation of his constitutional duty under the Take Care Clause. The provisions of Obamacare causing enormous trouble for insurance plans are mandatory, and only Congress can change those parts of the Affordable Care Act.

But President Obama has a history of violating the Constitutional balance of powers. As Kimberly Strassel of the Wall Street Journal has noted, he has unilaterally suspended enforcement of immigration law; he has refused to prosecute drug law violators; he simply stopped defending federal laws he didn’t like, like the Defense of Marriage Act, in court; he issues waivers on Obamacare and the No Child Left Behind Act; Obama’s Environmental Protection Agency has attempted to regulate carbon emissions when Congress didn’t push through a global warming bill; he appointed members of the National Labor Relations Board in violation of law; his administration rammed through an auto bailout that screwed bondholders, as well as a slush fund from British Petroleum. Strassel writes, “Mr. Obama came to office promising to deliver a new kind of politics. He did—his own, unilateral governance.”

I drew on Faithless Execution in last weekend’s column and in a follow-up Corner post, positing that, short of credibly threatening impeachment, Congress and the courts can neither compel a president to enforce the laws nor stop him from using his plenary pardon authority to grant a sweeping amnesty. That gets Obama two-thirds of the prize he is pursuing — namely, several million aliens whose illegal status has been purged, put on the path to inevitable voting rights that will give Democrats an invincible electoral majority.

As for the remaining third, Congress could, in theory, block the president from granting illegal immigrants legal status and other positive benefits (such as work permits) without impeaching him. To do thisin reality, though, Congress would have to use its power of the purse. Translation: It would take the credible threat of a government shutdown to check the president’s lawless conferral of benefits.

Alas, that constitutional parry has already been disavowed by GOP congressional leadership. If they persevere in this disavowal, it will be in defiance of their base (and against the sound tactical advice of Mark Krikorian). Yet such a signature display of preemptive surrender would come as no surprise given that, as previously argued here, their opposition to Obama’s imperious method of achieving his goal seems, shall we say, less than genuine. Moreover, the judiciary that Mr. Obama is stacking with Lawyer Left activists like himself can be relied on to twist the Constitution into mandating any benefits the president does not succeed in awarding.

Against this backdrop, I am gratified that Fox News’s Megyn Kelly and Charles Krauthammer have just given the topic of impeachment in the immigration context more of the serious consideration it deserves. Appearing on The Kelly File Thursday, Dr. Krauthammer asserted that the president’s anticipated amnesty decree for millions of illegal aliens “is an impeachable offense.”

He is plainly correct. As Faithless Execution elaborates, “high crimes and misdemeanors,” the Constitution’s trigger for impeachment, is a term of art for abuses of power that violate the president’s fiduciary obligations to the American people he serves, the constitutional system he takes an oath to preserve, and the laws whose faithful execution is his core duty. High crimes and misdemeanors are not — or at least, not necessarily — the same as “crimes” and “misdemeanors” prosecutable in the courts. Impeachment is a political remedy (i.e., the removal of political authority), not a legal one (i.e., the removal of liberty after criminal indictment and conviction). That is why Hamilton, in Federalist 65, described impeachable offenses as “political” in nature — as “proceed[ing] from the misconduct of public men, or in other words from the abuse or violation of some public trust.”

Do Not Let Your Hearts Be Troubled by David Haas is one of my favorite hymns to sing. The alto part is just gorgeous.