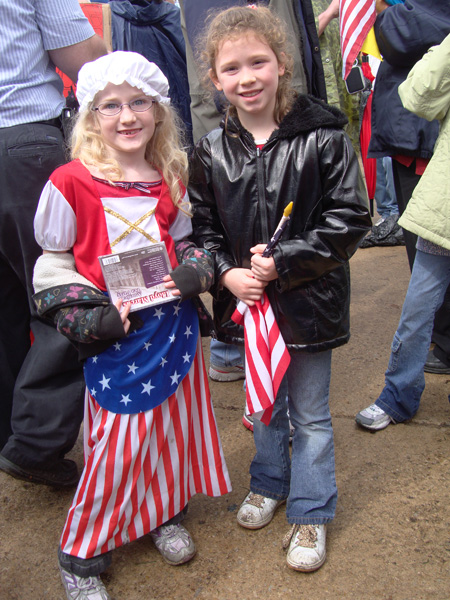 It was a wet one! The teaparty express was scheduled to make a stop at 10:00 am in front of the State capital in Topeka, Kansas, and I decided to go.  I was running late as usual, and was well along  my way when the torrential downpour began. Lots of cars were pulling off to the side of the road, and I had about an hour’s drive left ahead of me. I was wondering  how many people would show up in such nasty weather.

On to the signs…there were some good ones, as usual: END_OF_DOCUMENT_TOKEN_TO_BE_REPLACED

This doc is obviously ticked that Obamacare is now the law of the land. We  feel his pain, but still…

MOUNT DORA — A doctor who considers the national health-care overhaul to be bad medicine for the country posted a sign on his office door telling patients who voted for President Barack Obama to seek care “elsewhere.”

“I’m not turning anybody away — that would be unethical,” Dr. Jack Cassell, 56, a Mount Dora urologist and a registered Republican opposed to the health plan, told the Orlando Sentinel on Thursday.

“But if they read the sign and turn the other way, so be it.”

The sign reads: “If you voted for Obama…seek urologic care elsewhere. Changes to your healthcare begin right now, not in four years.”

Estella Chatman, 67, of Eustis, whose daughter snapped a photo of the typewritten sign, sent the picture to U.S. Rep. Alan Grayson, the Orlando Democrat who riled Republicans last year when he characterized the GOP’s idea of health care as, “If you get sick America … Die quickly.”

Right…this could get interesting.

Well, the readers of the Orlando Sentinel don’t seem to think it’s harsh:

Kris Sickles, aka “Pale Horse, one of eight members of the Hutaree, a Christian militia group  charged with seditious conspiracy in connection with a plot to kill law enforcement, doesn’t seem like your average conservative Christian.

Proceed with mind bleach on hand if needed:

The accused plotter looks to have starred in a deeply Not Safe For Work movie, filled with cursing, mock violence, pot jokes, and sound effects conveying flatulence. Sickles appears entirely naked but for a mask of President George W. Bush that obscures some, but not all, of his genitalia.

After reading that, there’s been a great disturbance to my psyche, as well.

Only Indicted Militia Member With Party Affiliation Is… a Democrat

Oh, and it’s  not the guy pictured above – it’s a different one.

Most of the indicted militia members accused of being anti-government extremists have active voting records, a check with area voter registration offices showed yesterday. One is a registered Democrat, and the party affiliations of the rest could not be determined. Jacob J. Ward, 33, of Huron, Ohio, voted as a Democrat in the 2004 and 2008 primary elections. He also voted in 10 other elections since 2000. Party affiliation in Ohio is determined by which party’s ballot they requested in the most recent primary election.

Oh, the narrative has taken a hit, all right.