Nine years ago today, Americans were forced into the conversion of an act of travel into acts of mass murder, by followers of a religion that claims to be peaceful, yet collects a trail of the bodies of those killed in its name wherever these followers happen to go.  And on that day, the rest of us were assaulted with visions of incomprehensible evil on our television screens, the sounds of terror and chaos on the radio, and tales of desperation, fear, and ultimately death, in our print media.  On that day, everything stopped.  And everything changed.

Televisions flickered in household after household, the images replaying the horror over and over, while the various network talking heads continued to ramble as if they tried hard enough, they might find the right words.  The right words to make themselves understand what they had witnessed.  The right words to guide a stunned and shaken nation to a harbor of emotional stability and clarity.  Each of us personally struggled with sorrow, with anger, with disbelief.  The unusually silent skies, cruised only by military fighters on patrol, did not offer any relief for these emotions.  And seeing images like these on our televisions as the day progressed offered a glimpse of the belief that refuses to be ignored, and is unrepentant about its actions:

I could have done without the peace of Islam that day, as could millions of others.

But then, as the evening approached, President Bush came to the microphone, as we expect our leaders to do at such moments, and he brought words that delivered, in part, what the pundits and anchors could not.  I have excerpted parts below.

Today, our fellow citizens, our way of life, our very freedom came under attack in a series of deliberate and deadly terrorist acts. 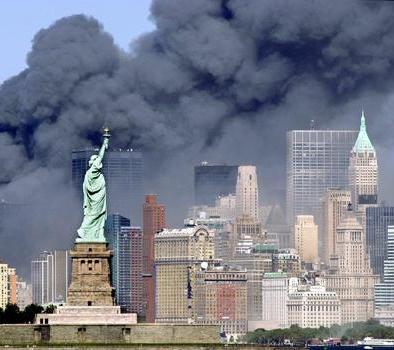 The victims were in airplanes or in their offices — secretaries, businessmen and women, military and federal workers. Moms and dads. Friends and neighbors.

Thousands of lives were suddenly ended by evil, despicable acts of terror.

The pictures of airplanes flying into buildings, fires burning, huge structures collapsing, have filled us with disbelief, terrible sadness and a quiet, unyielding anger.

These acts of mass murder were intended to frighten our nation into chaos and retreat. But they have failed. Our country is strong. A great people has been moved to defend a great nation. 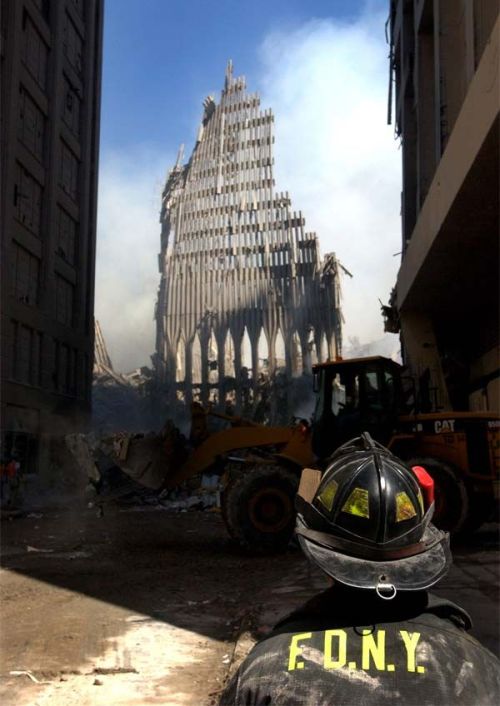 America was targeted for attack because we’re the brightest beacon for freedom and opportunity in the world. And no one will keep that light from shining.

None of us will ever forget this day, yet we go forward to defend freedom and all that is good and just in our world.

19 thoughts on “Nine Years Ago Today”