Now I’ve friggin’ seen it all….Pravda Online is reporting what the U.S. media refuses to:

Barack Obama is truly an amazing man, with many amazing friends. He has succeeded where countless others have failed. And he has also succeeded where many before him have succeeded with the same time honored methods.

He has managed to create an illusion of a Public Office that does not exist, The Office of the President Elect.

Barry Sotero, AKA Barack Obama, along with the Democratic National Committee and the Federal Election Commission have successfully ignored a Federal Lawsuit asking him to produce a valid Birth Certificate. When the time to respond to that lawsuit expired, under Federal Court Rules, they all admitted that he was not a citizen of The United States of America and deemed to have committed fraud. A normal man would have been found to have admitted he was not a US citizen.

But the man with no visible past, was blessed by a light shining from above on a Federal Judge, by having the lawsuit against him dismissed, three weeks after his non-response was proof that he is not a US citizen.

That lawsuit has since been taken to the US Supreme Court, where Obama, the Democratic National Committee and the Federal Election Commission have until December 1, 2008 to answer the complaint made against them.

Another lawsuit by another attorney against him to prove he is a US citizen has been scheduled for a conference of Justices of the US Supreme Court on December 5, 2008.

You can continue reading, but there’s not much there that you haven’t already seen on the few right wing sites that dare to blog about this.

MORE (from the Blogs):

Stop the ACLU has an update on all of the citizenship cases currently before the courts, including a report of possible sabotage, as one case, officially tendered to the Supreme Court, was referred to the Antrax Containment Facility.

Janet Porter of Faith To Action is raising money to put this ad on the air:

Go to www.Faith2Action.org and watch the ad. Any Web donation to Faith2Action from now until Dec. 15 will go directly toward airtime to place this ad on television. How much is it going to take? Well, $12,000 buys a national 60-second ad on Fox News between 5 and 6 p.m. I say let’s buy a few of those and publicize it so the rest of the world finally hears about the constitutional crisis we’re in. Then, (maybe – ed.)the Bill O’Reillys, Sean Hannitys and Rush Limbaughs may decide to cover the story of the century.

You can still sign the petition to release Obama’s birth certificate, here.

Porter made some good points at WND:

Look, we’re not asking for the world here. Neither is the Constitution. Some pretty basic requirements like being 35 years old, having 14 years residency in the United States, and being a natural born citizen. When Sen. John McCain was questioned about it, he showed his birth certificate without hesitating. When Barack Obama was asked by courts, including the U.S. Supreme Court, he ducked and hid behind the right to privacy.

Ironically, when Obama was running for the Illinois Senate, he won by disqualifying every candidate who ran against him in the primary, including a guy who had been through a nasty and salacious divorce. Even though he had a small child who could be hurt by the information being made public, a court decided that the public’s “right to know” outweighed this poor fella’s right to privacy, and he backed out. Obama clings to the “right to privacy” regarding his own qualifications, just not his opponents.

Another Constitutional question has emerged concerning Hillary Clinton’s appointment as Secretary of State:

The constitutional quandary arises from a clause that forbids members of the Senate from being appointed to civil office, such as the secretary of state, if the “emoluments,” or salary and benefits, of the office were increased during the senator’s term.

The second clause of Article 1, Section 6, of the Constitution reads, “No Senator or Representative shall, during the Time for which he was elected, be appointed to any civil Office under the Authority of the United States which shall have been created, or the Emoluments whereof shall have been increased during such time; and no Person holding any Office under the United States, shall be a Member of either House during his Continuance in Office.”

During Clinton’s current term in the Senate, the salary for Cabinet officers was increased from $186,600 to $191,300. Since the salary is scheduled to again be raised in January 2009, not only Clinton but all sitting Senate members could be considered constitutionally ineligible to serve in Obama’s Cabinet.

This is the sort of technicality, Republicans will most likely ignore, and in this case, (I can’t believe I’m saying this) should ignore, (because the alternative could be so much worse). But you know that if a Republican President Elect had done this, he would be called out immediately for it, and the appointment would have to be be withdrawn.

At any rate, if Obama can’t even be bothered to prove that he’s a natural born U.S. citizen, this quesion shouldn’t give him the slightest amount of pause. And I’m sure it doesn’t. 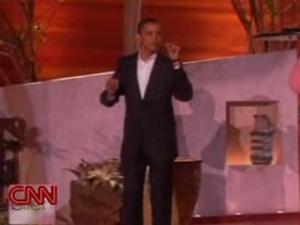 They have a similar dancing style, too.

Cashill makes a very compelling and convincing case that William Ayers is indeed the author of Obama’s book, Dreams From My Father.  Final report, here, for what it’s worth.

I still can’t believe our country elected this sociopath.