I wouldn’t be surprised if she was targeted by the Basiji thug because of her cross necklace.

Via Robert Spencer who noticed it first. Keep trying to get to his blog. It’s temporarily down.

McCotter’s Floor Speech On Iran: Her Name Was Neda

Neda’s Family Expelled From Their Home

This is beyond awesome.:

Honduras’ ousted President Manuel said he was getting on a flight home to reclaim his post on Sunday, accompanied by the U.N. General Assembly president and a group of journalists.

The interim government said it ordered the military to prevent the landing of Zelaya’s plane. If turned away, it will likely land in El Salvador, where a separate flight was headed with Latin American leaders who support Zelaya’s reinstatement.

Thousands of protesters were gathering in the capital of Honduras in anticipation of Zelaya’s showdown against the interim government in power since the army ousted him.

Police helicopters hovered over the main Tegucigalpa airport, where soldiers outnumbered travelers and commercial flights were canceled. Access roads were cut off by police checkpoints, with soldiers standing guard alongside.

I’m hearing that Telesur is the pro Chavez channel…funded by Venezuela.

Zelaya’s plane has landed in El Salvador, and Hondura’s legitimate President, Roberto Micheletti says that Nicaraguan troops are heading to the border with Honduras.

See Fausta for all the latest.

From the Catracho news feed chatroom:

Someone says that 80% of Hondurans support the new government.

Someone else asked people to pray for Honduras.

Zelaya supporters, and hired thugs are trying to infiltrate airport

hugomiranda on Twitter: The govt has placed vehicles all over the airport so Zelaya’s plane can’t land.

jryanlaw: The plane carrying the Argentine president Kirchner, Ecuador’s Correa and the OAS head has landed in El Salvador.

See also gerardoparedes for updates in English from Honduras.

Another good source of information: The Jungle Hut.

You’ll definitely want to check out this guy!

A recently retired Marine wanted to get to the bottom of what was going on in Central America so he hopped on a plane to Tegucigalpa, Honduras. and started a blog, Honduras Abandoned!

I felt that there was minimal news coverage coming from this region, and was intrigued when this little democratic country from Central America stood by its actions despite condemnation from the UN and the United States. Here is my experience within this country.

I felt that there was minimal news coverage coming from this region, and was intrigued when this little democratic country from Central America stood by its actions despite condemnation from the UN and the United States. Here is my experience within this country.

This doesn’t speak well for the Honduran military: There was bloodshed at the airport protest today, when a soldier/officer reportedly shot into the crowd of protesters who were throwing rocks at the soldiers. 2-3 people are dead. (correction- 1 confirmed dead) Mayhem ensued.

…. did see an older man in a white shirt reach down into the blood pool and cover his hands. He then wiped them on his shirt to make it look like his blood or that he had been involved. Hunter saw what he thought was an AP photographer take the man’s picture. Hunter said if you see it on the web, don’t believe it. It was faked.

He is heading back into the crowd and will update if anything warrants further coverage. Plans on posting pics and his write up when he gets back to hotel. It will be better than mine. Doing this from hastily scratched notes while confirming his safety.

There should be a full investigation into what happened, and the shooter punished to the full extent of the law.

Code Pink has sent a delegation to Honduras.…you can guess whose side they’re on…

It appears that the attempted coup by Zelaya, failed today. But he, Chavez, Castro, and Ortega, with  Obama’s blessing, may try again at another time.

Here’s the picture of the man who smeared blood on himself. Lefties lie and distort the truth as a matter of course. They can’t help themselves. It’s what they do.

It was a Reuters photographer who took the picture:

Supporters of ousted Honduras’ President Manuel Zelaya, one of them with a shirt covered with blood, talks to people next to a bullet-riddled motorbike outside the Toncontin international airport in Tegucigalpa July 5, 2009.
REUTERS/TOMAS BRAVO

One person was killed, and two wounded in the clash.

Abandoned Honduras has pictures up of the protest at the airport.

A video of the official chronology of events in Honduras that led to this crisis at CFP.

The Wall Street Journal: Honduras at the Tipping Point: Why is the U.S. not supporting the rule of law?

This is on top of the six that were hanged, last week:

The state-run Fars news agency reported that 20 people were hanged at the Karaj prison west of the capital on Saturday, and another 14 executions elsewhere in Iran have been reported by state media since Wednesday, including six hangings at Teheran’s Evin Prison. Many of those executed have been described in state media as drug traffickers – a charge often leveled at dissidents.

Iranian police say that about 1,000 people have been detained for involvement in the public protests that erupted after June 12 presidential elections.

Mir Hossein Mousavi, the defeated candidate who has branded the victory of incumbent President Mahmoud Ahmadinejad fraudulent, has been laying low since last Wednesday while still challenging the results.

Read the whole piece, which includes a revealing interview with an Iranian lawyer, who is working to get his protester client out of Evin prison.

More distressing news, via Dave in Texas at Ace’s:

The Bestest Mullahs You Could Ever Hope to Negotiate With Over Nukes: We Will Put Iranian Employees of the British Embassy On Trial For Fomenting Insurrection

The Violent Crackdown In Iran Continues

Senior Cleric Calls For Harsh Retribution For Dissent In Iran

Women Of Iran Lead The Resistance

A Nine Year Old Girl Is Shot By Basij

Neda’s Family Expelled From Their Home

The Crackdown In Iran Accelerates (UPDATED)

Who Is Hossein Mousavi Part II

Compare And Contrast: Obama On Iran To Reagan On Poland

The Lionesses Of Iran

Who Is Hossain Mousavi?

Video: What Is Going On In Iran

Yes, President Bush Was A Meddler

Iran’s Nuclear Program Is Not Peaceful

Video: The Iranian Uprising In Pictures

Who Does Ahmadinejad Remind You Of?

This has been on YouTube since March, and I haven’t seen it, yet?

I don’t know how that happened:

Hat tip: Smitty, The Other McCain

Another large crowd of protesters attended the Kansas City tea party on the Plaza at J.C. Nichols fountain from 12:00-2:00. With my camera freshly charged, I was able to take a few more pix: 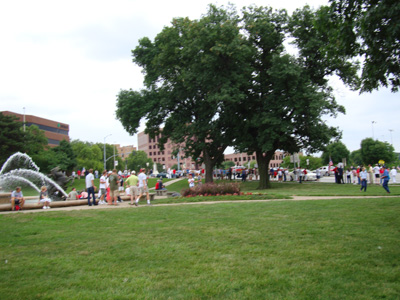 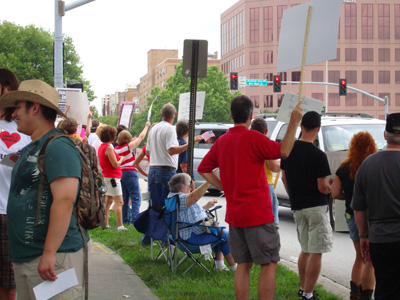 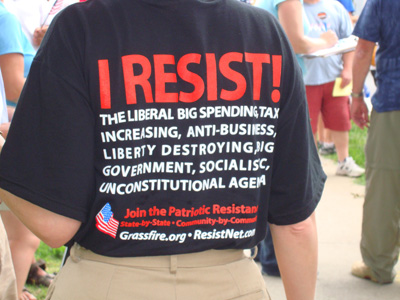 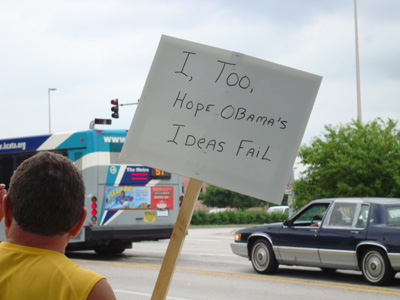 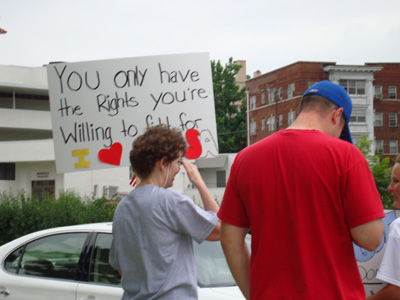 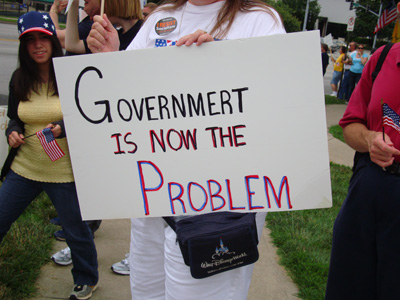 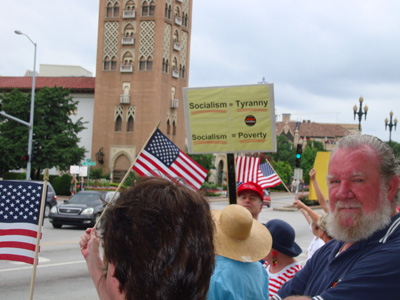 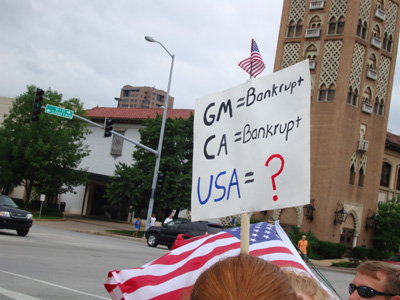 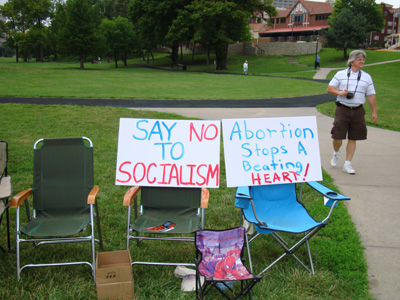 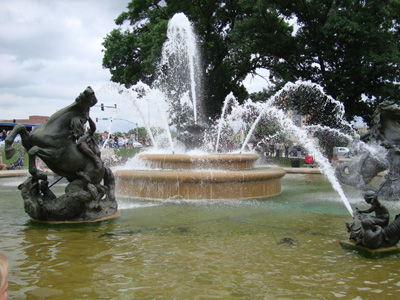 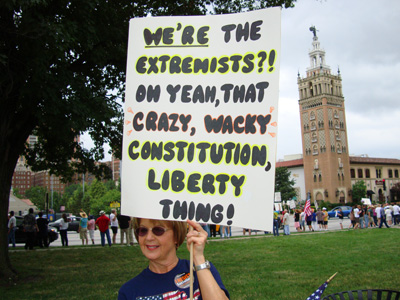 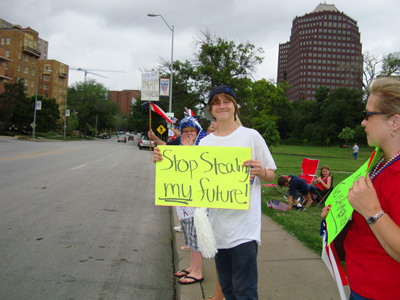 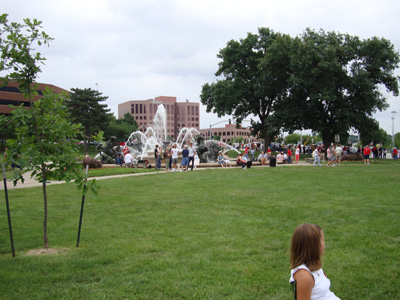 By the way…for some reason libs think it’s clever to point out that public money is spent on things like roads and bridges, the post office, police and fire fighters, so we must oppose that too, or we’re Socialists, or something. In other words, they equate our opposition to the insane unsustainable deficit spending that has been going on for six months, with all public spending. It’s a silly, dishonest argument. Still, they keep embarrassing themselves with it.

See Donald Douglas at American Power, and John Lilyea from This ain’t Hell for  good round ups of the nationwide 4th of July tea parties.