The battle rages on for the ancient Christian town of Maaloula, Syria  despite reports that government forces had retaken it.

Government forces are in Maaloula, but there is still fighting going on. I’ve heard a lot of heavy fire and one or two large explosions as well. Their opponents from the al-Nusra Front – the armed rebel group that is allied with al-Qaeda – appear to still be in the town. I’ve seen about half a dozen wounded government soldiers driven back at speed towards their rear echelon.

The town’s residents fled in a hurry to Damascus when the rebels first moved in. They are very upset and angry about what happened. Some told me that when they left, the al-Nusra Front desecrated some of their churches. There is quite a bit of damage to the town, but I can’t see considerable damage to the holy places. In fact, I can see a big statue of the Virgin Mary that is very much intact.

Free Syrian Army (FSA) units and members of the jihadist al-Nusra Front occupied Maaloula for several hours on Thursday before withdrawing when their positions were bombed by government warplanes. 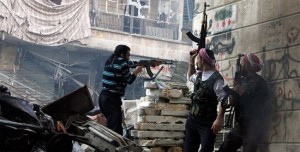 Via the Globe and Mail:

A Maaloula resident said the rebels, many of them sporting beards and shouting Allahu Akbar, or God is great, attacked Christian homes and churches shortly after moving into the village overnight.

“They shot and killed people. I heard gunshots and then I saw three bodies lying in the middle of a street in the old quarters of the village,” said the resident, reached by telephone from neighbouring Jordan. “So many people fled the village for safety.”

Now, Maaloula “is a ghost town. Where is President Obama to see what befallen on us?” asked the man, who spoke on condition of anonymity for fear of reprisal by the rebels.

According to one eye witness, five Christians were seized and  told, “either you convert to Islam, or you will be beheaded.”

A  Christian woman from the besieged town who had fled to Damascus tearfully told a BBC reporter about the Free Syrian Army & Al Qaeda Infestation, and begged Obama to stop sending them weapons “because they are killing us!” When asked what the rebels she saw terrorizing the town looked like, she said said they were wearing “Free Syrian Army” clothes. Those would be the “good guys” Obama has been arming. Note that they have been fighting right alongside the al Qaeda affiliated al-Nusra Front.

When the reporter asked her about Obama’s plan to punish the regime for killing civilians with chemical weapons, she cried, “no that’s wrong! It’s wrong!…it’s a big liar (sic) you can watch the video (this one?)  and you can tell…”

We absolutely need to stay out of this war. My God, I’m rooting for the government forces Obama wants to bomb to beat back the rebels Obama’s been arming.

I saw reports about this last week, last week but they were second hand, unverified reports. Now, the nun has come forward to tell the story first hand to RT. Her story has yet to be corroborated by other news sources.

Mother Agnes, a catholic nun, who has been living in Syria for 20 years and has been reporting actively on what has been going on in the war-ravaged country, says she carefully studied the video featuring allegedly victims of the chemical weapons attack in the Syrian village of Guta in August and now questions its authenticity. […]

A total of twelve Alawite villages were subjected to this horrendous attack. That was a true slaughterhouse. People were mutilated and beheaded. There is even a video that shows a girl being dismembered alive – alive! – by a frame saw. The final death toll exceeded 400, with 150 to 200 people taken hostage. Later some of the hostages were killed, their deaths filmed.

At the moment we are looking for the hostages and negotiating their release with the militants, but so far we haven’t managed to achieve that.

There are Western MSM journalists out there who are refusing to report these stories.

18 thoughts on “Video: Tearful Christian Woman Terrorized Out Of Her Syrian Village Begs Obama To Stop Arming The Rebel Jihadists”