A citizen on a rope line, picked at random by The One to ask a question manages to put forth a question that exposes the Marxist tendencies of said One.

He becomes an instant You-tube star, is invited to be a guest on talk shows, and is even mentioned (repeatedly) during the final Presdential debate by both candidates.

He is lauded by McCain at his rallies, and mocked by Obama at his.

Reporters begin digging furiously into his background, and tax records, plumbing credentials, what-have-you. The man must be destroyed. He dared to question the One. Therefore, he is a danger to him, much like Sarah Palin is,  who also must be destroyed. Therefore, reporters, many of whom are no doubt fresh off the investigative beat in Alaska, start snooping into Joe the Plumbers affairs. They hit pay-dirt!:

Wurzelbacher registered as an apprentice with the Ohio State Apprenticeship Council in November 2003, according to Dennis Evans, spokesman with the Department of Job and Family Services. Records show his training, which was sponsored by A & W Newell Co. of Toledo, should have wrapped last year.

And that’s not the only record that’s missing from Wurzelbacher’s file. He doesn’t have a plumbing license required by the city of Toledo to practice, according to a staffer with the Toledo Division of Building Inspection. Wurzelbacher, who now works for Newell Plumbing & Heating Co., said the owner, Al Newell, has a plumbing license and that “because he works for someone else, he doesn’t need a license.”

But even that’s not true, according to the Toledo Division of Building Inspection. Wurzelbacher can’t legally do plumbing work without a license, regardless of his boss’s certification.

A staff person with the Toledo Division of Building Inspection told On Call this afternoon that her division will contact Wurzelbacher to notify him that he can’t work without a license.

“We’re trying to track him down,” she said.

In the meantime, the Democrat-friendly local plumbers’ union is fuming.

His boss’s business probably doesn’t bring in anywhere near $250,000 a year so he should stop dreaming about turning it into one that does and what that might mean for his taxes. Which should be easy enough; he’ll probably be out of work soon anyway.

According to court records, creditors have secured at least two liens against [Joe the Plumber] Wurzelbacher, whose legal name is Samuel. Ohio has a $1,182 lien for owed taxes and St. Charles Mercy Hospital has filed a 2007 lien for $1,261.

My, what a great service the media is providing for the Republic, by exposing this nasty Rethuglican and destroying his career. We can all breathe a big sigh of relief…safe as we are, from the wiles of this dangerous rube.

That wouldn’t be providing a service to the Republic. No. Obama’s “willing accomplices in the media” believe it is for our own good that certain stories not see the light of day. They know what’s best for us.

Shucks! Listen to this guy. He says it all better than I ever could:

Thanks to Ace, who shares his thoughts:

This guy seems blue collar, like that imbecile Joe the Plumber, so I assume “elites” were around to explain to his ig’rant ass how to turn on the picture-gizmo, and how to move his face-hole to make word-sounds come out, and how to refrain from fun-touching his daddy-stick for a full five minutes.

McCain To Obama: Lay Off Joe The Plumber

McCain meets Joe the Plumber for the first time.

He says we’ll be hearing more about it in the next few days.

If that sounds slightly hyperbolic, you should know that no less a personage than Greta Van Susteren is working on this story, and she thinks something is afoot. She’s asking readers to use their google-fu to help research the story:

1. The Secretary of State of Ohio Jennifer Brunner filed a request in the Supreme Court relating to the underlying claim in her state that there has been voter registration fraud…with ties to the work of ACORN in registering voters.

2.  A group — the Service Employees International Union [SEIU] — filed an amicus brief in the United States Supreme Court asking the Supreme Court to rule with the Secretary of State of Ohio (and essentially asking for a ruling that would be favorable to ACORN in that it would “call off the dogs.”)

3.  I thought it curious that SEIU would file an amicus brief for Brunner and did some quick research …and now I need more indepth research (which is where YOU come in.)  According to my quick research..the same person who started ACORN, started SIEU.  His name is Wade Rathke. So then I wondered, who is Wade Rathke?

4.  I did some really quick research and learned that Rathke was a member of the anti war group SDS.  This is where YOU come in again.  If you know 60’s history, you know that the Weather Underground was an offshoot of SDS. There was some disagreement in the late 60’s and members of the SDS – Bill Ayers and his wife – left and formed/ joined the Weather Underground.

So now I am wondering: do Rathke and Ayers know each other (from SDS / Weather Underground days)? what is the connection now, if any, between them? between ACORN and SEIU? between them and Senator Obama?

966 comments so far, including my tip about the Mike Klonsky SDS Obama connection.

Ohhh, yeaahhhh…..Another commie for Obamie who just happens to come from the SDS, too, and was good friends with Bill Ayers and Bernadine Dohrn.

This was his Barack Obama Community Blog before he got thrown under the bus: 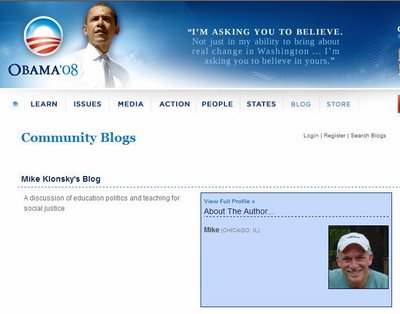 At a crucial moment in the Democratic primaries, (Wade Rathke’s) ACORN announced that it would be endorsing Barack Obama, possibly destroying any meaningful chance Hillary would have had to win Ohio.

Now Rathke, is coming through for Obama, again, by pleading with The Supreme Court to rule with the Secretary of State of Ohio, Jennifer Brunner.

We’ll soon see if “the dogs” are called off.