Alarming News has the picture of the day.

Cuffy has the video of the day.

I didn’t realize Chicago got the LEAST amount of votes. Ouch!

There was some seriously bad political mojo there in Copenhagen.

First Letterman’s humiliation. Now the Olympics just shot-putted Obama in the nuts. I hereby declare October 2, 2009 to be SCHADENFRIDAY.

Publius at Big Government: So, not only did Chicago lose out in its bid for the Olympics, it lost in the FIRST ROUND. It is kind of like the world community saying to President Obama, “Not only no, but Hell No.”

Rich Lowry at The Corner posts: Top 10 Reasons Chicago Didn’t Get the Olympics

The Anchoress: Did the IOC recognise a weak horse? UPDATES

I would never root against America….but I would root against Obama and his corrupt Chicago cronies making out like bandits on the deal. The city of Chicago was evenly split on the Olympics…does that mean half of those people were rooting against America? Glen Thrush is an idiot.

THE EGO HAS LANDED

OUT IN FIRST ROUND

Now, he’s formally asking Governor Pawlenty to look into the possibility of voter fraud in the election of Franken, ( which he won by 312 votes in a recount). Given the recent exposes of ACORN’s corruption, and the fact that they registered 43,000 votes in Minnesota, he thinks another look is warranted:

They’re hoping to get an answer by Monday.

I’m not derelict on this story, myself,  having mentioned it in a post, a whole week ago. I just was hoping that this disgusting story, which to me, is even more egregious than the Van Jones story, would have taken on a life of its own, this ridiculous oxymoronic czar would have gone down in flames by now, and I wouldn’t have to spend any more time on it. But no.  Kevin Jennings still seems to be employed by the White House – and is still in charge of keeping schools safe.

•Jennings failed to report a case of statutory rape of a *15 year old who confided in him that he had had sex with a much older man at a train station. Jennings’ did express concern that the boy use a condom.

•Jennings wrote the forward to a book called “Queering Elementary Education”.  Bonus: Another familiar face wrote one of the endorsements on the book jacket—Bill Ayers. Ayers, of course, is the former Weather Underground bomber, an Obama pal, and ghostwriter, who worked with him on school related boards in Chicago during the nineties.

•Jennings’ organization, GLSEN sponsored (at least one) conference where homosexual activists instructed children age 14 and up on how to perform homosexual acts. How bad was it? When a recording from one of these conferences became public, the firestorm that ensued became known as “fistgate”.

Audio tape from the conference, here.

*According to Mass Resistance:

GLSEN is part of the tax-supported Massachusetts Commission on Gay Lesbian Bisexual and Transgender Youth. (In fact, GLSEN’s membership in that commission is mandated by law!)

*Also according to Mass Resistance:

GLSEN (and Kevin Jennings) did not dispute that the recordings were genuine or that the events did not take place as we described them. Instead, they tried to get a court to ban the tape and sue us. In fact, Jennings defended the event.

Even Bertha Lewis, the Executive Director of ACORN had the sense to condemn the enabling  of underage prostitution after the ACORN prostitution controversy erupted.

•Jennings in 1997 reportedly praised Harry Hay, noted supporter of of the North American Association for Man-Boy Love Association (NAMBLA), which promotes the legalization of sexual abuse of young boys by older men. You can read the transcript of Jennings asserting that “one of the people that’s always inspired me is Harry Hay”, here.

*(Update):A good biography, The Real Harry Hay, was written at The Boston Phoenix upon his death in 2002:

Notable: That group he formed, the Mattachine Society, which Jennings referred to in the  speech, appears to have kicked Hays out in 1954 because he was too radical for them.

He was also a lifelong Communist who was booted out of the party in the early ’50s.

The  article also mentions his support for NAMBLA:

He was, at times, a serious political embarrassment, as when he consistently advocated the inclusion of the North American Man/Boy Love Association (NAMBLA) in gay-pride parades.

In his own determined, often irritating, manner, Harry Hay resisted becoming a model homosexual hero. Nowhere was this more evident than in Hay’s persistent support of NAMBLA’s right to march in gay-pride parades. In 1994, he refused to march with the official parade commemorating the Stonewall riots in New York because it refused NAMBLA a place in the event. Instead, he joined a competing march, dubbed The Spirit of Stonewall, which included NAMBLA as well as many of the original Gay Liberation Front members. Even many of Hay’s more dedicated supporters could not side with him on this.

Obama’s “Safe Schools Czar” said he was inspired by him.

Not someone to be inspired by.

•Jennings has a history of ridiculing and demeaning Christians: Reportedly said of Christians—“ F___ ‘em” while speaking at Marble Collegiate Church in March of 2000.

Goodness gracious me. Doesn’t Obama vet these Czars he has working for him, at all?  Or….is it possible he has exactly the sort of people he wants in these positions?

I was reminded of a minor Obama controversy during the election campaign. Remember Obama’s outrage and indignation over the McCain campaign’s attack ad over Obama’s vote in the Il Senate for a sex education bill? The ad charged that the bill included sex education to kindergartners. Obama said it only would have taught “good touch, bad touch” to children that young. Not true.

For your edification: Obama supported Sex Ed For Kindergarteners, The Video:

People didn’t want to believe this about Barack Obama at the time. Can they believe it now?

Ann Coulter had some suggestions for Obama on the Sean Hannity  show, tonight:

POWIP covers CNN reporter’s attempt to whitewash the story. Get ready for the homophobe smears. Who are the whistleblowers, here? Pro life, pro-family groups? I hope they’re girding their loins.

Lefty apologists like Media Matters are apparently focusing on the age of the boy, Brewster, whom Jennings has stated was 15 years old  when the alleged public bathroom sex with the older man took place, making it statutory rape. They claim he was 16, past the age of consent.

I ask, what about “Fistgate”? What about the alleged admiration for a renowned pedophile …etc?

The strong language used in the title of this post was in no way meant to imply that Mr. Jennings is a pedophile, himself.  It was meant to imply that he appears to be comfortable with his group promoting what most Americans would consider sexually perverted behavior to school children. He is the founder and executive director of GLSEN,  an organization that sponsored conferences where children as young as 14 were exposed to explanations of depraved practices, and in one instance, it was caught on tape.  I think it’s fair to wonder about all of the conferences and workshops sponsored by GLSEN that have not been caught on tape. As for Jennings’ purported admiration (based on transcript linked to above) for NAMBLA supporter, Harry Hays, I think that  speaks for itself.

At any rate, I chose to reword the title of my post to eliminate any confusion. No, I don’t think he himself, is a pedophile.  I do consider him to be a pervert.

I changed my title to reflect that he (yes indeed!) is unambiguously a pervert, especially in light of recent revelations. The man has no business having a position with influence over kids, and Obama had no business appointing him to such a position.

Here’s a video from a June press conference about the Jennings appointment, conducted by Americans For Truth:

A website has been set up to advocate the firing of Jennings as Obama’s Safe Schools Czar: expeljennings.org.

Click Here to Tell Obama and Congress that Kevin Jennings Has No Place in the Department of Education.

Mr. Jennings has been appointed by the President as Deputy Assistant Secretary for the Department of Education’s Office of Safe & Drug Free Schools. His supporters claim that he will only establish programs to combat bullying.  If that were true, it would be a worthy cause. Bullying for any reason is is wrong, and schools should never tolerate it.  But time and again, Mr. Jennings has used the cover of “bullying prevention” to enforce his radical positions on sex education.   The idea that we need the “queering” of elementary education in order to teach children that bullying is wrong is as absurd as it is offensive.

From the American Thinker On Obama’s pick for the Safe School Czar:

The Long March of Kevin Jennings 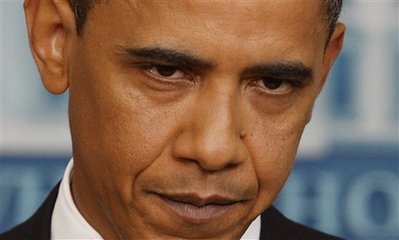 What in the heck are we dealing with, here?

Read: Sympathy for the Devil

How concerned should we be about Obama?  Is he a potential dictator with a weird cult following who could destroy this country?

To put it more bluntly, does Obama have the potential for inflicting evil on us?  Or, if he’s a puppet, are the ones holding the strings malevolent?