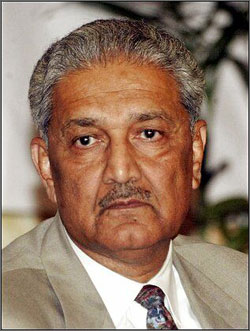 The war on terror is dead, just like they say.

In an interim ruling on a petition from A.Q. Khan, the Lahore High Court ruled on Friday that no restrictions should be placed on the movement of the top scientist who was freed from a five-year house arrest earlier this year.

The development is likely to send ripples of worry across the international community that remains concerned at Dr. Khan’s involvement in nuclear proliferation.

Khan’s  position at Urenco, a Dutch-based company making components for the nuclear industry, in the 1970s made him an extraordinarily valuable figure in Pakistan.

Pakistan was an unstable state that had suffered the crushing humilitation of losing half its territority – now Bangladesh – in an Indian-backed revolt in 1973.

When Dr Khan returned with his Dutch wife, Hendrina, with blueprints for centrifuges – the highly engineered machines that refine uranium, an essential ingredient for a nuclear bomb. A grateful government backed his every demand.

As the programme grew the trade became a two-way flow, and highly lucrative. Investigators eventually called it the nuclear Walmart.

Dr Khan’s first customer was Iran in 1987 but he also dealt with North Korea, Iraq and Libya.

The scientist was detained in December 2003 and admitted on television in early 2004 sole responsibility for operating a network that spread nuclear weapons technology to Iran, North Korea and Libya. He has since repeatedly retracted that statement.

So he’s nuclear proliferator, and liar, and now he walks a free man.

The Foundry does it again:

More at The Heritage Foundation:

The White House brags that it will cut the deficit in half by 2013. The President does not mention that the deficit has nearly quadrupled this year. Merely cutting it half from that bloated level would still leave budget deficits twice as high as under President Bush. Furthermore, three upcoming developments–the end of the recession, the troop pullout in Iraq, and the phase-out of the supposedly temporary “stimulus” spending–would, by themselves, cut the budget deficit in half.

The new budget spending estimates are alarming and absolutely unsustainable–and are the true cause of these appalling levels of deficit and debt. President Obama has proposed massive tax increases that still cannot keep up with the historic spending increases he has proposed. The result will be highest level of spending–and debt–in American history. Within a decade, Washington would have to spend nearly $800 billion annually just to pay the interest on the national debt.

In this budget context, the President’s and Congress’s brazen proposals to create a $1 trillion health care entitlement are reckless and unaffordable. Lawmakers should focus on capping federal spending, restraining entitlements, and eliminating wasteful and lower-priority programs.

Yes, of course that’s what liberal Dems *would* be doing if their goal was actually to strengthen the economy.

Peak growth in the last expansion? 3.6%.

Obama’s glide path to fiscal responsibility — where we merely run nearly a trillion dollars in deficits every single year — relies upon the assumption we’ll rocket to 3.8% growth by 2011 and then in excess of 4% growth for three years running, 2012-2014.

And based on those rosy projections, we’ll merely run a $905 billion deficit every year. If it’s lower than that — which, of course, it will be — then the deficits will be… who knows. It’s not real money anymore anyway. It’s just ZimbabweBucks.

A few days ago, I asked why the Obama Justice Dept. was reopening the CIA abuse case. I wondered what they had to gain from investigating the people who kept us safe for eight years when  an overwhelmingly majority of Americans disapprove of it. There were some good suggestions in the comments. Jackstraw hinted ominously:

Hillary Clinton came out the other day and explicitly endorsed the world court and bemoaned the fact that the US is not a player in it … yet.

I believe the explanation lies in the Obama administration’s fondness for transnationalism, a doctrine of post-sovereign globalism in which America is seen as owing its principal allegiance to the international legal order rather than to our own Constitution and national interests.

Recall that the president chose to install former Yale Law School dean Harold Koh as his State Department’s legal adviser. Koh is the country’s leading proponent of transnationalism. He is now a major player in the administration’s deliberations over international law and cooperation. Naturally, membership in the International Criminal Court, which the United States has resisted joining, is high on Koh’s agenda. The ICC claims worldwide jurisdiction, even over nations that do not ratify its enabling treaty, notwithstanding that sovereign consent to jurisdiction is a bedrock principle of international law.

As a result, there have always been serious concerns that the ICC could investigate and try to indict American political, military, and intelligence officials for actions taken in defense of our country. Here it’s crucial to bear in mind that the United States (or at least the pre-Obama United States) has not seen eye-to-eye with Europe on significant national-security matters. European nations, for example, have accepted the 1977 Protocol I to the Geneva Conventions, while the United States has rejected it. Protocol I extends protections to terrorists and imposes an exacting legal regime on combat operations, relying on such concepts as “proportional” use of force and rigorous distinction between military and civilian targets. That is, Protocol I potentially converts traditional combat operations into war crimes. Similarly, though the U.S. accepted the torture provisions of the U.N. Convention Against Torture (UNCAT), our nation rejected the UNCAT’s placing of “cruel, inhuman, and degrading treatment” on a par with torture. By contrast, Europe generally accepts the UNCAT in toto.

As long as we haven’t ratified a couple of bad human-rights treaties, why should we care that Europe considers them binding? Because of the monstrosity known as “customary international law,” of which Koh is a major proponent. This theory holds that once new legal principles gain broad acceptance among nations and international organizations, they somehow transmogrify into binding law, even for nations that haven’t agreed to them. That is, the judgment of the “international community” (meaning, the judgment of left-wing academics and human-rights activists who hold sway at the U.N. and the European Union) supersedes the standards our citizens have adopted democratically. It is standard fare among transnational progressives to claim that Protocol I is now binding on the United States and that what they define as cruel, inhuman, and degrading treatment is “tantamount to torture.”

This is exactly why so many of us so objected to the nomination of Harold Koh to his powerful position in the State Dept.

Foreign charges would result in the issuance of international arrest warrants. They won’t be executed in the United States — even this administration is probably not brazen enough to try that. But the warrants will go out to police agencies all over the world. If the indicted American officials want to travel outside the U.S., they will need to worry about the possibility of arrest, detention, and transfer to third countries for prosecution. Have a look at this 2007 interview of CCR president Michael Ratner. See how he brags that his European gambit is “making the world smaller” for Rumsfeld — creating a hostile legal climate in which a former U.S. defense secretary may have to avoid, for instance, attending conferences in NATO countries.

The Left will get its reckoning. Obama and Holder will be able to take credit with their supporters for making it happen. But because the administration’s allies in the antiwar bar and the international Left will do the dirty work of getting charges filed, the American media will help Obama avoid domestic political accountability. Meanwhile, Americans who sought to protect our nation from barbarians will be harassed and framed as war criminals. And protecting the United States will have become an actionable violation of international law.

The president directly addressed a number of pervasive rumors about his proposals.

These fabrications, Mr. Obama said, are distracting the country from its “core ethical and moral obligation… that we look out for one another.”

By fabrications, Obama means undeniable facts, except in the case of the “death panel” which isn’t technically true because that was set up in the stimulus bill.

The undeniable facts that  the government would fund abortions, and lead to a single payer health care system have already been dealt with.

What about the concern that health coverage would be provided for illegal immigrants?

It turns out that the non partisan Congressional Research Service has pointed out that HR3200, the House version of ObamaCare does nothing to prevent it:

“Under H.R. 3200, a ‘Health Insurance Exchange’ would begin operation in 2013 and would offer private plans alongside a public option…H.R. 3200 does not contain any restrictions on noncitzens—whether legally or illegally present, or in the United States temporarily or permanently—participating in the Exchange.”

The bill contains no verification requirement or enforcement process for citizenship or legal residency, as exists for other federal benefit programs. The only verification required for the subsidies pertains to family income. Beyond that, as the CRS report notes, everything is left in the hands of the Health Choices Commissioner.

House Democrats defeated all attempts in committee to add an enforcement mechanism that would require proof of citizenship or legal residency for those getting subsidies.

CRS also notes that “undocumented aliens” who have a “substantial presence” in the US would be required to buy health insurance (page 4) through the exchanges in HR3200.  They would also become eligible for “emergency Medicaid,” although not normal Medicaid (page 6) for up to five years.

What about Section 246, which I said would prevent the spending of money on illegal aliens?  The CRS analysis is less than impressed with that portion of the bill.  Section “246 would bar unauthorized aliens from receiving any premium or cost-sharing credit,” it says, but that may be hard to enforce.  It also states later that “absent of a provision in the bill specifying the verification procedure, that the Commissioner would be responsible for determining a mechanism to verify the eligibility of noncitizens for the credits” — or in other words, HR3200 fails to provide it entirely.  I gave it a little too much credit, apparently, more than Congress’ own analysts do.

So, there you go. Yet another myth busting, myth busted.